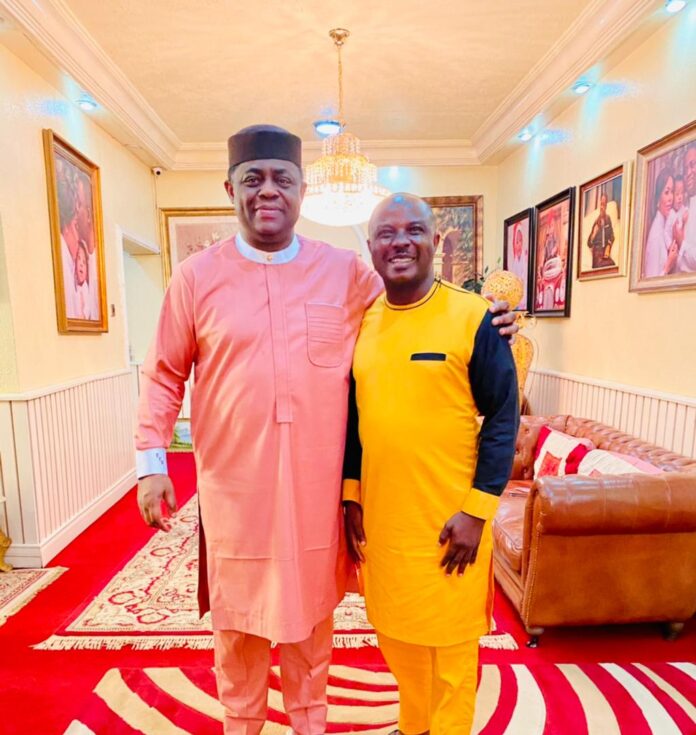 Femi Fani Kayode, Nigerian former Minister of Aviation has given thumbs up to the National Association of Online Security Reporters, NAOSRE over its commitment to unbiased security reportage in the face of insecurity.

He gave the appraisal on Saturday in Abuja during a late night meeting with the President of the online media association, Mr. Femi Oyewale.

The former minister enthused that he has been following the activities of the association especially in its commitment to bridging the information gap between citizens and security agents.

Femi Fani Kayode emphasized that the task to enthrone a secured Nigeria should be all inclusive.

“All hands must be on deck to fight insurgency. The media has a big role to play and I am very happy NAOSRE has engaged itself in such onerous task. I am proud of you Femi and you have my support,” he said.

Continuing, the lawyer noted that he has always been a friend of the media and would continue to hold the media in high esteem despite the once-a-while disagreement adding that he would have been personally present at NAOSRE Dinner Summit which held at Oriental Hotel on December 11, 2020 in Lagos but for other tight schedules.

“I have always maintained that I am a friend of the media and it remains so. We may disagree sometimes. Disagreement is an integral part of friendship and should be expected amongst friends,” he explained.

Oyewale however thanked Femi Fani Kayode for his words of advice and promised that the NAOSRE he leads will not disappoint Nigerians.

Femi Fani Kayode whose father was a minister in the first republic, was the Special Assistant (Public Affairs) to President Olusegun Obasanjo from July 2003 until June 2006. He was appointed the Minister of Culture and Tourism of the Federal Republic of Nigeria from 22 June to 7 November 2006 and as the Minister of Aviation from 7 November 2006 to 29 May 2007

Mouka react to violent attack and disruption of activities by staff