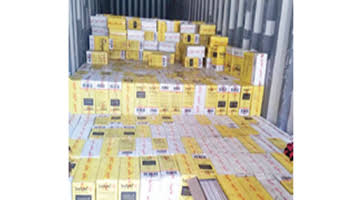 Not less than N4.18billion banned and fake dugs have been seized at the seaports in May this year, following 100 per cent physical examination embarked upon by the  Nigeria Customs Service (NCS).

Besides, 2,498.2 kilogrammes of Tramadol were impounded at the port few days ago.

The drugs were packed in 120 miligrammes capsule, 20 sachet per pack and 18 packs per carton.

He noted that the container was picked as a result of intelligence gathering from international security network, saying that it was transferred to the Government Warehouse for 100 per cent physical examination.

He noted: “We are always ready to conduct 100 per cent examination. We will not be pushed to do anything in a hurry as the clearance procedure is well explained. 100 per cent examinations is one of the key aspects of the clearance procedure in Nigeria. Therefore, all importers should know that making unclear or false electronic declaration does not mean they will have an easy way out with their consignment.

“Every container that arrive Onne Port must be subjected to 100 per cent examination after relevant duties and charges have been paid and necessary procedures followed. But no compromise to examination and all cargoes must be examined. This is one of the results you are seeing here.”

He added that the service conducted meticulous examinations to separate the ceramics tiles used for the  concealment.

Mohammed said that no consignment would be released from Onne Port without the due diligence of 100 per cent physical examination, adding that the importer, agent and their collaborators would be prosecuted in competent court of law.

The Coordinator noted that the 664 cartons of drugs intercepted were without National Agency for Food, Drug Administration and Control  (NAFDAC) number.