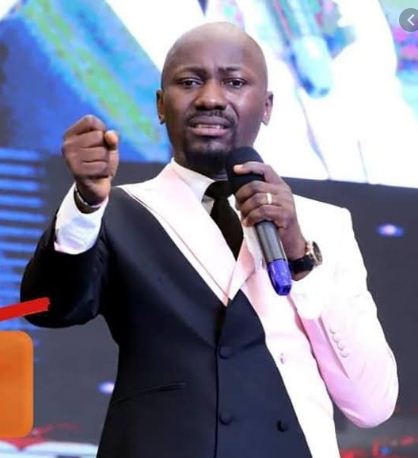 A male participant at the May 2021 edition of ‘Wonders Without Number’, a healing and miracle programme organized by the Omega Fire Ministries (OFM) worldwide, has admitted that he received amazing reward moments after listening to prayers made by the Senior Pastor of the ministry, Apostle Johnson Suleman.

According to the obviously excited man who is into real estate business, he had followed Apostle Suleman’s programme since the first edition. However, he participated virtually in the May edition where he heard the servant of God mention his case and prayed for a positive change.

“You mentioned my case. I am into real estate and you prayed that there would be a turnaround,” the participant stated in his thanksgiving statement.

He stated that he posted a house for sale on his WhatsApp platform like he always did which attracted no patronage. But after participating in the last session of the May edition of ‘Wonders Without Number’, he was shocked to have been paid the sum of 65 million naira for the house by a client. “On Sunday, I had less than five naira in my bank account but today my level has changed. Indeed, my time has come,” he declared.

The businessman’s was not an isolated case at the prayer programme, more amazing stories are told by hundreds of other participants who also shared their healing testimonies.

Chizoba from the United Arab Emirate said in her testimony that “I had a serious dislocation on my right knee and I didn’t know how it came about. It made sounds at every movement of the leg but God has healed me through ‘Wonders Without Number’. God also gave me a financial breakthrough.” Pastor Emmanuel Eruke who is based in Italy, wrote in his testimony: “You mentioned my case saying someone had a peppery sensation under his feet. Instantly, I received my healing. Since then, the pain has gone, I can now walk freely. Praise the Lord.”

While giving his teachings during the programme, Apostle Suleman asserted that, the biggest miracle the world will ever see is someone receiving Jesus as their saviour because He is the only one that has eternal value. While he prayed that there are more people who receive salvation at every programme of his ministry, he also prayed for signs and miracles that will point the people to the true God that loves them and truly can set the captive free.

In the midst of the session, a female participant, Victoria, testified that God fhealed her of appendicitis through ‘Wonders Without Number’. “I joined the the programme after the prayers one day up till now. And I haven’t felt any pains since then.” Ifeoma Benson wrote: “You prayed for people with sickle cell anemia. My son touched the screen while you were praying and on the 11th day of ‘Wonders Without Number’, the sickness stopped in under five minutes.”

Also, Bawack Paul from Cameroon testified that he was relieved of his indebtedness after watching the programme from his country. “I was in serious debt that burdened me. Papa, you declared miracle money and I keyed into it. I later received enough money to clear my burden and even had leftovers. On the last day of May Edition, you declared freedom from asthma and I was also healed.”

For the record, Apostle Suleman’s OFM is known not only for teaching the fear of the Lord, but also for extraordinary miracles that follow the preaching of the Gospel.

I foresee Taliban taking over some states in Nigeria –Primate Ayodele