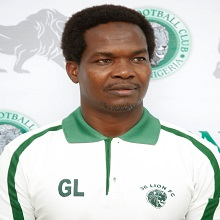 The President of Lagos based side, 36 Lion Football Club, Alhaji Gafar Liameed has revealed that it would be all most impossible to play over 60 matches in six days to produce a State FA Cup champions.

In an online chat with The Moment Nigeria, the seasoned football administrator and investor disclosed these in the wake of circular sent to all the 37 state Football Associations in the country by the Nigeria Football Federation (NFF), directing that all State FAs should produce their FA Cup winners within 10 days.

Liameed whose club pulled out of the Nigeria National League (NNL), because of many unforseen reasons and bad organisation of the league stated that the time is too short for a state like Lagos with over 80 clubs competing for the trophy.

The 36 Lion FC helmsman, whose club have produced talented players who have not only represented the county in the various National teams but have regularly moved abroad for greener pasture decried the impact of the COVID-19 on football in the country especially at the grassroots level.

The revered football administrator advised the Lagos State FA as a matter of urgency and to get out of the improbable situation, to pick either Smart City football club, the current State FA, defending champions or MFM Football Club who plays in the NPFL to represent the state in the National Aiteo Cup draws holding next week.

“COVID-19 has done lots of damages to our football and our daily lives, We simply don’t have any kind of system in place to tackle whatsoever calamity befalls us hence we rely only on divine interventions,” he noted.

He expressed hope that the FA in Lagos state would choose either Smart City FC or MFM FC as the state’s representative for the AITEO Cup especially considering the form in which MFM is right now.

“Is it possible to play over 60 matches in 6 days ?, I doubt this hence its better they pick either Smart City FC or MFM FC has the State representative, that is the answer right now. Any of these two clubs will give Lagos a good representation,” he stated.

“Lagos State with 80 or more affiliated clubs and Lagos FA Cup already paid for by clubs can never produce a single winner in 6 days,” he said.

Speaking further, Liameed lamented that had Lagos FA been proactive with foresight this sudden demand from the NFF especially that we have a couple of our seniors representing us in Abuja would have begin the State FA Cup before now.
Meanwhile the Federation in a letter dated June 4, 2021 directed all State FAs to produce their Aiteo Cup representative not late than 14th June, 2021.

This directive have thrown most if not all the state FAs in deep shock and confusion with urgent solution needed to be found before the deadline.

Nigeria’s oldest championship, named National Challenge Cup in 70s also known as FA Cup but recently renamed Aiteo FA Cup with Aiteo company as the main sponsors, was not held in 2020 due to the ravaging COVID-19 pandemic.

However, The winner of the 2021 edition of the championship will represent Nigeria in the CAF Confederation Cup.