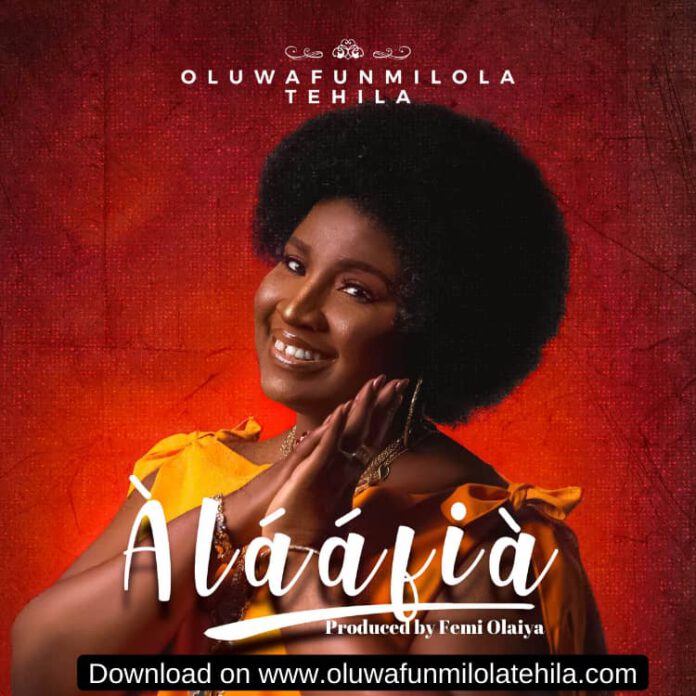 A gospel minister, Mrs. Oluwafumilola Philip-Adewunmi, has released a divinely inspired song, titled ‘Alaafia’ (Peace) which she produced to subdue the chaos, trouble and crisis being currently experienced across the globe, including Nigeria.

Minister Adewunmi, who is a certified life coach and NLP practitioner, said the song is a spiritual recipe to the challenges facing the country, stating that music is a strong avenue and medium to get the message across to everybody.

According to her, the Alaafia single, which was produced by Femi Olaiya and available on her website page, divulges to all the type of peace the Lord Jesus promised those who trust in him regardless of the storms of life and challenges seeking to displace joy from their hearts.

Speaking on the significance of the album, she said, “I chose to produce this particular song because I think is very germane to the position we are in right now globally. The pandemic has sent everybody into some form of panic and has taken peace from a lot of people. The fear in the land is palpable and drums of war are rolling, but the word of God is alive and His peace will take over through this song.

The Obafemi Awolowo University graduate noted further that, “The reason why I chose to produce this song is because I want every one of us believers and non-believers to begin to speak peace into our situation and country, because our words will create the world we find ourselves.

“So, when I say where ever I go Alaafia, whatever I do Alaafia, whoever I meet Alaafia- I am intentionally surrounding myself and my person with peace and i think we all have to do this as well.”

Confident that the song will accomplish its aims, she said, “My song will go on social media platforms, print media and radio. By God’s grace television as well. People will begin to sing it; and as they sing the messages will begin to sink. Leaders will get to listen to the song, sing the song and begin to desire the realities of the song. By and large, change will come.”

Oluwafunmilola Philip-Adewunmi has featured extensively in different roles and capacities. Alongside her husband, she runs ‘So TiGboIntiative”, an NGO focused on the wholesome development of the Nigerian youth and young adults. The outfit has been running for the upwards of 10 years with outreaches in the three major regions of the country. She is currently in the hospitality industry aside her music ministry.

BBNaija ‘Shine Ya Eye’, Olympics and more to watch this week on DStv, GOtv

Olamide: How Bariga life motivated me to hustle hard

5 ways to stay up to date with your favourite shows