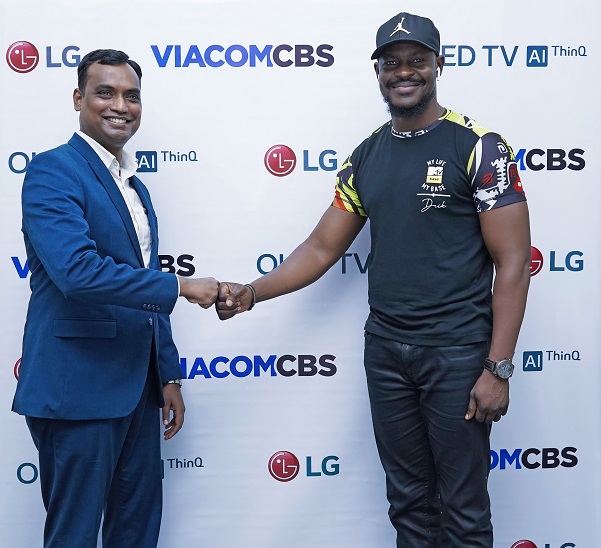 MTV Base, BET Africa and CBS to showcase LG OLED across platforms

LG Electronics, one of the global leaders in consumer electronics and global multimedia entertainment powerhouse, ViacomCBS Networks Africa (VCNA) have officially announced and formalized their advertising and sponsorship deal.

The details of the partnership between the two brands include LG OLED brand advertisements across VCNA channels from MTV Base, BET Africa, Comedy Central, and CBS Reality – as well as LG OLED brand sponsorship of key programming contents on MTV Base.

Speaking on the partnership, Mr Hari Elluru, Head, Corporate Marketing Manager, LG Electronics West Africa Operations, stated that, “The LG OLED partnership with VCNA is a testament to LG’s drive and passion as Nigeria’s leading Home Entertainment Consumer Electronics brand to connect with its broad customer base through platforms that have premium reach and are impactful.”

He disclosed that the philosophy of LG’s mantra – ‘life’s good’ – revolves around people, sincerity, understanding our customers and offering optimum solutions; noting that the partnership will enhance the LG OLED TV brand to further tell its story.

“To create value-added solutions which brings greater convenience and enjoyment to our consumers, LG OLED TV (Gallery design) draws its inspiration from art, entertainment and technological innovation around the world. Working with the VCNA brands reinforces our strong reputation as a people-centric company that can make customers smile.

“At LG, we are looking at the future, we are working hard on developing innovative products aimed at improving daily life and helping you on your journey to a better well-being and sustainability. We believe that the generations of today and tomorrow are capable of incredible things,” Elluru submitted.

Also lending his voice to the partnership, Country Manager for Nigeria at VCNA, Mr. Bada Akintunde-Johnson, said: “We are delighted to formalize our partnership with LG although they have partnered with us in one capacity or another over the years. This deal brings together the best content or shows in this market from our stable and the best TV sets available in the market from LG. Doesn’t get any better than this for consumers/audiences. With the ball already set in motion and with 2021, we fully expect both parties to derive maximum value from the partnership but at the end of the day, the real winners are the consumers. They are the reason we do what we do so well.”

While in the past, the LG brand has collaborated with the youth music led channel ,MTV Base, on strategic on-air and digital engagement initiatives such as MTV Base December Christmas Giveaways, New Music Friday, Top 10 Street Anthems etc., the partnership is poised to do a lot more that would further contribute to the successes of both brands in the market.

With more than half the population of Africa under the age of 18, the media and entertainment industry consistently drive creativity and innovation to connect young audiences with cross-platform content, hoping to grow today’s generation of increasingly digitally native youths into tomorrow’s brand-loyal consumers.

Through its collaboration with MTV Base, LG OLED TV will actively engage generation Z consumers in Nigeria, sharing its message of sophisticated luxury with the digital generation.

MTV Base is a 24-hour youth music brand from VCNA. The channel is available across Africa on satellite, Pay TV, terrestrial television and digital platforms.