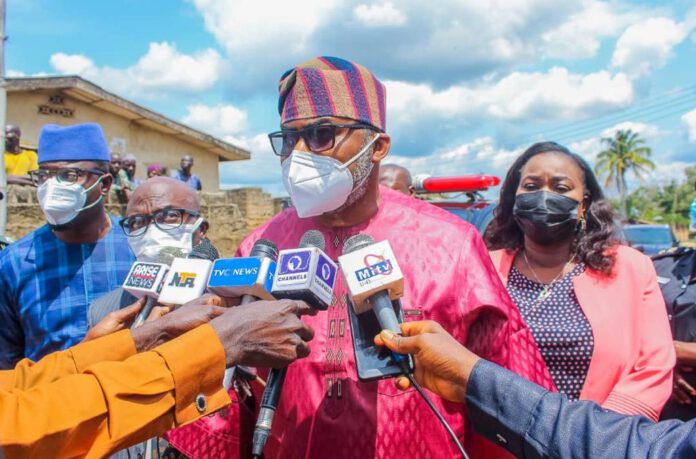 The Government of the State of Osun has called on residents of the state, especially religious and ethnic groups, on the need to coexist peacefully in order to maintain the peace profile of the state.
This call was made by the Deputy Chief of Staff to the Governor, Prince Abdullah Binuyo, who led the state government’s delegation on an on-site assessment of the crime scene as well as a solidarity visit to the victims receiving treatment at the UNIOSUN Teaching Hospital. He assured the victims of the sad event that the government would deploy the weight of the law to  bring the perpetrators of the shameful act to justice.
On Sunday, a traditional religion group reportedly unleashed terror on worshipers at Kamorudeen Central Mosque, at Oluode Aranyin in Osogbo around 2.30 pm.
The incident left one person dead and nine others injured through bullet and machet wounds.
“For us as a government, one of the cardinal things we preach to our citizens irrespective of their religious leaning, is the need to coexist peacefully and ensure that the rights of their neighbours are not infringed upon in any way.  trying to preach your faith.
“We’ve been to the hospital to visit the casualties arising from yesterday’s attack, and we are appealing for calm on both sides, to avoid any case of reprisal attacks from any quarter.
“This is a major issue that the government will step into, investigate what actually happened and bring to book those responsible for this very unfortunate act.
“Based on the update we have, one person was killed yesterday and we have about eight injured people in the hospital. They are responding to treatment and hopefully, they will be discharged today.
“The government will pick the hospital bills of those receiving treatment to ensure that we do not put further pressure on the victims”, Binuyo said.
In the delegation were: Commissioner for Health, Dr. Rafiu Isamotu; Commissioner for Information and Civic Orientation, Mrs Funke Egbemode; Special Adviser to the Governor on Security, Mrs Abiodun Ige; and Special Adviser to the Governor on Osun Investment Promotion Agency, Prince Femi Adeniran.

Trump: I will not be going to the Inauguration