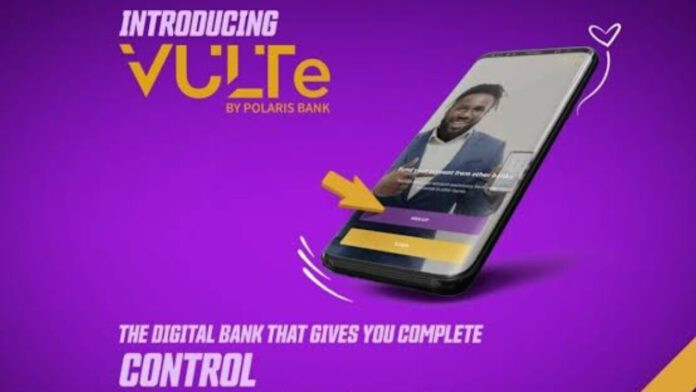 With an average downloads volume of 50,000 per week since launch, VULTe, Polaris Bank’s digital banking platform, is looking to reorder an emergent space and reposition the parent institution for enhanced stakeholder value.

When on May 19, 2021, the VULTe digital banking application vaulted from the purple hues of Polaris Bank, most watchers of developments in the Nigerian banking landscape would be forgiven if they concluded it was a “VULTe from the blues.”

Staid and apparently intimidated by the impact of a cycle of regulatory hammers, it was easy for observers to perceive the bank as one preoccupied with routine survival business practices rather than be involved in revolutionary industry innovation. When you come to industries in any economy, there are always two categories of players that spearhead the revolutions which alter the courses of change.

The first includes the big payers. This is in view of the fact that with their size and financial advantage, they often attract the skills (inhouse or from vendors) needed to drive increased industry dominance. The second category is made up of total outsiders who, from years of observing trends and noticing service gaps, create disruptive solutions that draw customers through superior value propositions.

Mid-table and bottom-rung players rarely lead industry revolutions. They have their struggles to contend with and when those struggles include unflattering perception, rising from this to think outside the box is usually difficult.

But the case in Nigeria is looking like a reverse expectation. While the threat of outsiders such as the telecom giants is clear and present, it looks like it is the players at the bottom-to-the-middle of the food chain that will be at the forefront of the next generation of financial services in Nigeria. There are outsiders such as Kuda, Rubies, Eyowo, Sparkle, FairMoney and a number of others, but among the traditional financial services providers, it would seem the bigger wave-maker has been ALAT, a digital banking app belonging to Wema Bank. Although lately beset with significantly high negative user perception, ALAT still have the largest share of mind, especially among the tech-migrants in the traditional banking community.

What is happening in regard to the developments in the country’s emerging digital banking revolution is taking the shape and form of what happened from the middle 1980s all through the 90s when the then famed “big four” banks, namely; First Bank, Union Bank, United Bank for Africa and Afribank slept in size-induced complacency, allowing the then smaller banks to adopt the integrated banking model to rise to prominence and eventually, dominance. Some of those banks were either startups or taken over by a new breed of revolutionaries that latched on the need by customers to transact their businesses at any branch closest to them as against the inconveniences of locating the particular branches where they opened their accounts.

History appears to be repeating itself if one considers that so far, the present-day big banks have all been slow to embrace digital banking. The illusion appears to be on the general mistake most are making in confusing digital banking or neobanking, with online or internet banking. While it is true that the Central Bank of Nigeria is still protecting the traditional banks from a decisively revolutionary blow by the big telecom companies by slowing their full entry into the financial services business, the future of the Nigerian banking pecking order may eventually be determined by the speed with which traditional banks take early position in the neobanking space.

This is where the early moves of the duo of Wema Bank, Sterling Bank and Polaris Bank provide an opportunity to access the larger industry, even though many other players ae still sitting in comfort zones of branch spread and balance sheet size.

What is in a name?

The old casual debate on the relevance of the names we give to people and brands returns with the entry of these brands in the digital banking ecosystem. But the answer lies in the huge investments that businesses make in brand development and the digital banking business will not be any exception. If names are not important, then, the whole business of branding and differentiation would have been totally unnecessary.

Besides its role in providing identity, names are also important in defining the functional DNA of products and services. When Steve Jobs and his team were creating the Apple brand, the idea was to have a name that will be easy to recall, not sound too techy, and have an evocative sex appeal. Jobs himself said he wanted a name that was “fun, spirited and not intimidating” for the technology brand he was building. Giving this background, it would be in order to conclude that Wema bank, in naming its digital banking solution, ALAT, was informed by the need to connect through the everyday language of sending and receiving money, playing on the symbolism of ALERT.

This has very obvious advantages as it lends to easy recall and association. But that might serve well in an industry that is not crowded. When competition begins to drown the environment, ALAT might begin to narrow in its mental evocation to suggest only payments, which is a very narrow aspect of the universe of digital banking.

And the industry is getting crowded. Sterling Bank, with Abubakar Suleman leading a team that positions the bank as tech-friendly in May 2020, launched its One Bank Digital Banking platform. I guess the choice of name was informed by the perceived need to connect to the bank’s payoff of “One Customer Bank.” But I have issues with how enduring this would be given the tendency of businesses to change taglines as different bends in business navigation are made. Standard Chartered Bank has also launched its own SC Mobile and it would appear from its casual nature, that not much consideration was given to the name the new outfit was going to adorn.

The real enemy ALAT might have will emerge from a competition that shares its purple livery and that is in Polaris Bank’s VULTe. VULTe, in sound and phonetic onomatopoeia, carries two other strong imageries; the one is “volt”, which suggests electromotive force and speed. The other is “vault,” which might mean between a safe lock-room (for money as found in banks) or, as in sports, to jump over a high fence (as in Pole Vault) and break barriers.

These are not functional differences and may exist in the mind only. But in the emotional world of marketing, perception is often everything.

The wider digital banking industry is growing and in a community with the likes of Sparkle, owned by former Diamond Bank CEO Uzoma Dozie; V by VFD Microfinance Bank; Rubies, promoted by a fintech company called QuCoon; Eyowo, FairMoney and Kuda, three of which were online savings and lending platforms, the power to differentiate, even if by sound and eponymous name choices might prove to crucial in growth.

But it seems VULTe may become the minimum standard for the future development of neobanking in Nigeria. At launch its architecture has been designed to accommodate customers and non-customers of Polaris Bank. This might be a winning edge this solution has for now. Enjoying such an advantage at launch confers immense growth opportunities. What is not clear is if Polaris’ VULTe is compliant with standards that will facilitate payments under the International Bank Account Number (IBAN). If this answer is yes, then this will offer a strong edge in the consummation of transactions.

Apart from Eyowo, it appears VULTe is the only other digital banking solution in town that supports Quick Response (or QR) transaction processing. QR Codes are capable of storing loads of data while also lending to instant access to the stored information by the reader. All mobile phones these days come with QR Code readers and this may be a major edge in an age in which speed and safety of online information have become critical.

The numbers it is ramping up just weeks after launch might also be indicative of its future. Two weeks after it was launched, VULTe achieved over 100,000 downloads. Although this still places it quite far behind FairMoney and Kuda Bank, with over one million downloads, each, its average growth rate points to the potentials of competing quite fairly. Launched in 2017, FairMoney ramps up an average of 4,800 downloads per week. Kuda Bank, on the other hand ha fared better, with twice as many downloads per week, given that it was launched two years after FairMoney, in 2019. On its part, ALAT, also launched in 2017 has had just over 500,000 downloads, translating to a weekly download of less than 2,400

The numbers appear impressive and with its average 4.2-star rating (ALAT has dropped to one star rating over the past 6 months while only FairMoney and Kuda are scoring above 4 stars) but it will take sustained efforts to arrive the promised land. It is still early days for a service ecosystem that is still evolving but it is safe to note that Polaris Bank, against expectations, is off on a good start.