David Oyedepo, founder of the Living Faith Church Worldwide (LFCWW), has defended the sack of some of the church’s pastors.

A sack letter issued to an LFCWW pastor by Adebisi Aboluwade, the church’s executive secretary, had earlier circulated on social media.

The letter showed that a Benue-based clergy was being relieved of his job due to the low growth index of his church.

“Consequent upon the recent performance reviews which revealed that your Church growth index falls below expectations. Please be informed that your services as a Pastor-in-Charge are no longer required,” the letter read.

“You are to vacate the official accommodation (where applicable) and hand overall properties of the ministry in your custody, including your staff identity card to the area pastor before departure.” 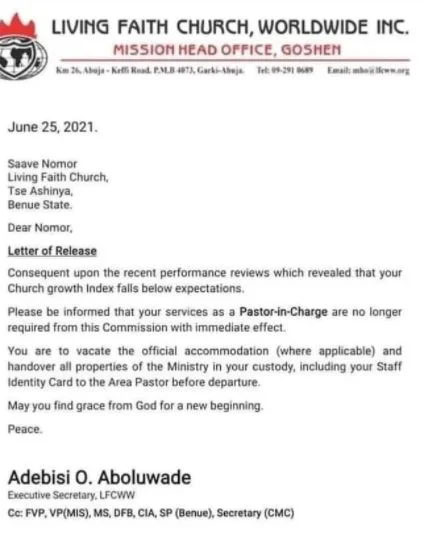 It was also gathered that one Peter Godwin and 40 other pastors of the church were sacked for underperforming.

Addressing the controversies that have trailed the development in a now-viral video, Oyedepo justified the dismissal of the pastors while also describing them as “unfruitful, blatant failures”.

“People are confused about our ministry. Some fellows said, ‘they didn’t bring income, that’s why they were asked to go.’ We asked you to go because you’re unfruitful blatant failures. We have no question with failure,” he told his congregation.

Oyedepo: Our church has more employees than most states in Nigeria

Oyedepo also listed some of the church’s wins, claiming that the LFCWW employs more people than many states in the country.

The bishop stated that the church built over 1,000 structures in rural areas, some costing up to N35 million.

“When we employed 7000 pastors at once, social media was dead. We have more employees than most states. No one is owed a dime of salary. Ask our organisation whether we take overdrafts,” the LFCWW founder argued.

'We asked you to go because you are unfruitful, blatant failures' – Pastor Oyedepo speaks on the sack of multiple pastors of his church over 'low income'. #TheCableLifestyle pic.twitter.com/4NKRQ8vMx9

“We don’t borrow, we don’t beg. The pastors were asked to go because they were unfruitful. Many of the churches built can never pay for the church building in 30 years. We have no patience for failure here.

“We have built more than 1,000 rural churches. None of those churches can generate that fund in the next 30 years. We are hunting after souls. Money? nonsense! We have never lacked it, yet, we have never prayed for it.

“Next set is about to be flagged off, just certifying landed property issues, nothing else. We have no lack of anything. The world is confused. You don’t need so much Maths to know a thousand buildings that are not N1000 each.

“Fani-Kayode never assaulted nor sexually harassed any of us” —Nurse, staff...