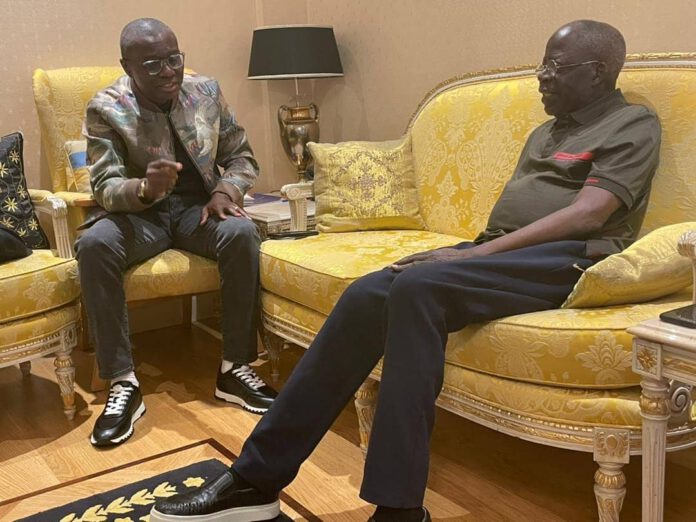 Lagos State Governor, Mr. Babajide Sanwo-Olu has said that the National Leader of the All Progressives Congress (APC), Asiwaju Bola Ahmed Tinubu is “hale and hearty” in London, the United Kingdom.

The governor, who spoke to journalists on Wednesday in Lagos a few hours after his return from London, said he made the trip and shared the photos with the APC leader to dispel the rumours about his ill-health.

“Yes, indeed, I am the one you saw in the picture that I took when I visited our leader in London just to dispel all of the rumours that were flying around that he was sick and hospitalised,” Sanwo-Olu said via a statement by his chief press secretary, Gboyega Akosile.

Speculations about Tinubu’s health reached a fever pitch last weekend after his conspicuous absence at the party’s ward congress in Lagos.

The former Lagos governor was also missing during the local government elections in the state penultimate Saturday.

Last Saturday, Mr. Tunde Rahman, Tinubu’s media aide had issued a statement to maintain that his principal was not in a hospital abroad or had any medical problem that would require hospitalisation.

However, on Tuesday, photos of Governor Sanwo-Olu and Tinubu in London were circulated on social media as part of efforts to allay fears of the APC leader’s infirmity.

“I went to see things for myself. It is just to put the mind and heart of people to rest that there is nothing for us to worry about,” the governor disclosed.

When asked when Tinubu would likely return to Nigeria, Sanwo-Olu said only the APC leader could answer that.

“A man has discretion as to decide when to go out of the country and when to return. It is his call. Is he coming here to do Governor’s work? Can’t you see the picture we took together? Picture doesn’t lie,” he said.

Makinde: 2023 presidency shouldn’t be our issue for now

FG know where kidnappers are, only being careful –Lai Mohammed