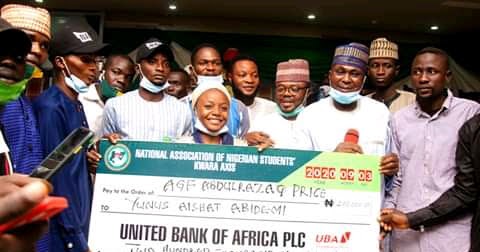 The contest tagged #Accesspreneur received about 30 corps members as participants from various platoons while each participant was given the podium to defend the proposal submitted for the contest.

According to information made available by a reliable source at the Orientation camp, each platoon has three representatives which sum the representatives to the total number of thirty (30) from ten (10) platoons.

The bank further screened the representatives and selected top ten (10).

The source further said she was in number three (3) with best proposal out of the top ten that were selected, she was eventually the only person that qualified from her platoon. It was very competitive and they selected based on merit.

Speaking further, she said the money was awarded based on the proposal submitted by each representative after thorough scrutiny.

Recall that Aishat Yunus as an undergraduate of The Federal Polytechnic Offa won the sum of two hundred thousand naira ( #200,000.00) as the winner of National Association of Nigerian Students ( NANS) Entrepreneurship contest organised for tertiary institutions in Kwara State in 2020.