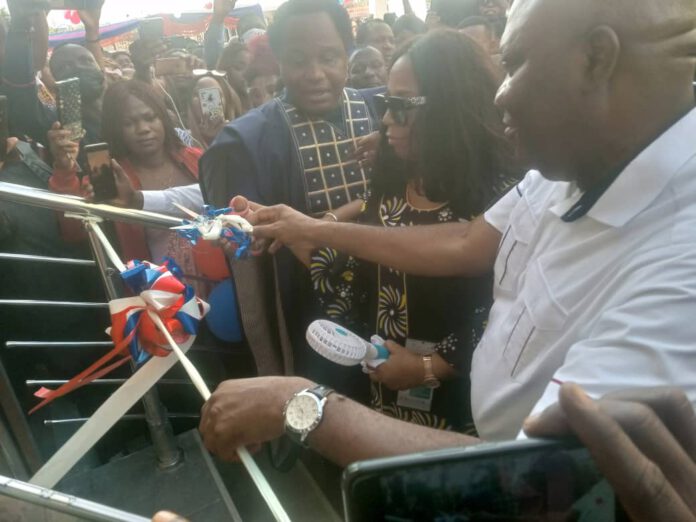 It was a dream come true when 28 home subscribers received keys to their new luxury apartments at the unveiling of Haven Residence, an exquisite estate located in Abijo GRA, along Lekki Expressway, Lagos.

Haven Residence, which sits on six plots of land, was constructed by PWAN Haven, one of the 33 affiliate companies under Property World Africa Network (PWAN Group).

Speaking recently at the home allotment event, the Managing Director/Chief Executive Officer of PWAN Haven, Dr. Frederick Efeoghene Okpaje, explained that when fully completed the estate would house a total of 36 families within the prime property zone of Lekki Scheme two.

Dr. Okpaje added that, at every stage of construction, his firm made sure that acceptable standards, quality, and integrity, which he said is the hallmark of PWAN Group, were maintained.

“We never compromise any standard in this pilot project. Everything we put there is verifiable, you can cross-check, the sizes of blocks, the amount of cement that we used, iron rods, everything is spot on. So to our dear subscribers, I say congratulations to you.”

“Altogether we are going to have about thirty-four units here. We made it a little bit easier for people who want to come in for visiting, we have been able to carve a space for visitors’ car pack, so your visitors are not going to drive in. Your visitors would have their car park. And you can monitor your home from your mobile phone and that is what the pro man calls a smart building,” Dr. Okpaje added.

The elated Chairman PWAN Group, Dr. Augustine Onwumere, noted that the home allotment event marked the second time in three weeks that PWAN Group handed over keys to home subscribers. He described the all-inclusive celebration as a welcome development pointed out that the accomplishment also represents a further reduction in the housing deficit in the country.

His words: “I am very happy standing here and speaking to you today. We are here to celebrate the unveiling and allotment of homes to deserving Nigerians who have supported the growth of PWAN to the next level. This is the second time in the year 2021that PWAN Group is allotting homes to our subscribers.

“When many businesses are closing down due to the covid, we found ourselves on the platform of blessings of the Lord who has made it possible for PWAN to continue to empower people, to lift families even as communities are being transformed. Abijo will not say that there is nothing new happening in Abijo today.”

He continued: “I was here when the initial groundbreaking was done. And to my surprise seven months after, I came here yesterday night, I was screaming beyond my understanding that this thing can stand here in seven months.”

Dr. Onwumere recalled that PWAN Plus, another affiliate company under the group, did home allotment in July followed by PWAN Haven adding that two other companies will also give keys to new homeowners before the end of the year. “We are making the homeownership dream a reality,” the Group Chairman stated.

The Group Managing Director, Dr. Jayne Onwmere, explained that when PWAN Group started, they knew little or nothing about the real estate business. She however said that the group has today revolutionalized the industry, maturing from mere buying and selling land to building and allotting homes to property subscribers.

“Today If you are going to remote villages, you will see someone saying I am a PWAN member; PWAN made it possible. The revolution we started nine years ago is touching lives in different places, different locations.”

“When we were doing the first allotment, I said that very soon we would be doing this. And in no distant time, two more are home allotments and handing over of keys. are coming. Before the end of this year, not less than seven PWAN companies would have dedicated homes,” the added GMD added.

The Okpaje expressed heartfelt appreciation to all home subscribers who trusted the firm with their monies believing blindly in the group’s integrity to deliver intact.

The colorful event was graced by all the Managing Directors. Chief Executive Officers of the affiliate companies, PWAN Property Owners(PBOs), and marketers.