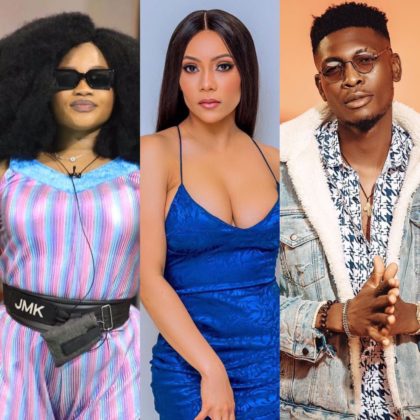 After six week in Big Brother Naija reality show, JMK, Sammie and Maria have become the next set of housemates to be evicted from the ‘Shine Ya Eye’ season.

JMK was evicted first, while Sammie and Maria followed suit. That leave 17 housemate left in the show.

The reality show’s host Ebuka Obi-Uchendu announced this on Sunday during the live eviction show.

While it was certain that at least one of the Nominated Housemates was going to be on their way out, nothing prepared them for the fact that three Housemates would bid the Big Brother House goodbye.

When ask how she feel being evicted from the show, JMK said: “I feel excited, no heel feeling, I appreciate the opportunity to be part of BBNaija and I will never forget the experience”

Meanwhile, on his part Sammie said: “I will miss Angel the most, I looking forward to the outside word, I need to pursue my ambition, which is film making”

A grand prize of N90 million, which is the highest in the show’s history, will be handed out to the ultimate winner.

The sum of N30 million will be the cash prize while N60 million will cover travel and other gifts. Housemates are expected to entertain fans of the show while engaging themselves in a fierce tussle for the prize.

Abeg is the headline sponsor of Big Brother Naija season 6, and the associate sponsor is Patricia.

To find out more about this and other information on the sixth season, visit www.africamagic.tv/bigbrothernaija. You can also follow the official Big Brother Naija social media pages for news and updates with the hashtag #BBNaija on Instagram @bigbronaija and Facebook www.facebook.com/bigbrothernaijaas well as all verified social media pages of DStv Nigeria, GOtv Nigeria, and Africa Magic.

Popular Nollywood star in trouble over defilement of girl, 14