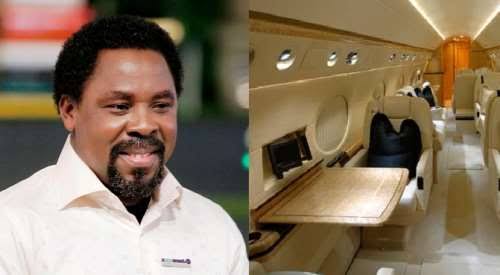 Crisis continue to rock the late T.B Joshua’s Synagogue Church of All Nations (SCOAN) over who becomes the next leader.

Late Prophet Temitope Balogun Joshua’s Synagogue Church of All Nations (SCOAN) has continued to rock following fresh discoveries that some of his aides have allegedly put the SCOAN founder’s Private Jet up for sale without due approval from Joshua’s family and the church members.

A concerned member of the SCOAN, Elder Emmanuel Kayode, told our correspondent exclusively that the clique has also momentarily seized some assets of the church while diverting funds from the church’s foreign partners to an illegal church account they newly created.

The church Elder lamented the unfolding developments at the SCOAN, blaming it on those he described as errant Prophets, Prophetesses, disciples, and evangelists of the demised televangelist. He accused them of not heeding the SCOAN founder’s warnings to let love lead.

His words: “Times are changing. Paradoxically, the Prayer Mountain of the church at Agoda Egbe designed only for prayers became their residence! They completely abandoned their official quarters in the church and relocated to the Mountain along with their attendants where they were living large.

“The Prayer Mountain was embarrassingly and gradually becoming a place where they hold parties conducting their businesses and private affairs – a development that was never in practice when TB Joshua was alive. None of TB Joshua’s family is privy to all monies collected from partners all over the world during his burial and after the burial.”

Another reliable source in the church, who spoke in confidence added: “They took over the church’s strong room carting away the money with reckless abandon. Sometime in the thick of the night, they would come with several giant “Ghana-must-go” bags to cart away currencies to the Mountain not knowing they were being cleverly recorded. They have their bureau de change.

“Their scheme and operation were well-conceived. They even went ahead to open another Global network account without the church or family’s knowledge. Available Information shows many of them have become overnight multimillionaires within the last few months.”

Elder Kayode continued: “Their agenda is tall and total. All Prophet TB Joshua’s phones which contain valuable contacts and information including global partners were withheld by them. After a lot of pressure from Mrs. Joshua and several well-meaning personalities who held several long hours of meeting with them demanding for her husband’s phones, and allow sanity to reign, they eventually released the phones.

“By the time they released them they had wiped off everything in the phones so that she won’t have access to anything about them and partners! But before then they had also transferred all the information to their private custody. They have been using the information to contact partners and securing funds without the knowledge of Mrs. Joshua or any authentic members of the church beside a few of them on top of the discipleship.”

“But something is more worrisome and shocking. Without the knowledge of Mrs. Joshua and the family, these people of God now living on the PrayerMountain arranged to sell TB Joshua’s aircraft before the bubble burst! All arrangements had been perfectly sealed by them before the fraud was discovered,” Elder Kayode stated.

Our correspondent learned that following the death of Prophet Joshua, the said aides unilaterally constituted themselves into the APEX COUNCIL for the church and appointed within themselves a new General Overseer G.O. and Mommy G.O.

“Far beyond this they also established the Governing Council for the church in which all positions are shared within themselves with no member of TB Joshua’s family or any church member on board. Ironically, these are mere TB Joshua workers who are not even qualified to be called church members because by the Church’s Constitution for you to be recognized as a church member you must also be a financial member. This is a critical factor for membership which none of them has,” another member of the church said on condition of anonymity.

New Telegraph learned that church members, “saw their actions as spiritual coup detat or a kind opportunistic spiritual gangsterism that is antithetical and inimical in the sanctuary; and became disenchanted

According to Elder Kayode, right from the moment of TB Joshua’s passing, the errant disciples translated themselves into extraordinary uncontrollable authority and power with enormous and reckless freedom. “They became worldly to the chagrin of church members with flagrant disrespect and nonchalant attitude to their mentor, TB Joshua’s family.

“Many concerned church members became pissed off over their selfish desires and hypocrisy: ‘So these so-called disciples were pretenders when Daddy was alive?’ One foundational church elder thinks aloud. Their lifestyles suddenly changed too. They took over all workers, sacked those they didn’t trust, and brainwashed all others into total submission to their whims and caprices to such an extent that none of them would respect any instruction or request from Mrs. Joshua in flagrant dishonor and nonchalant attitude! It was a spectacle of the highest order.”

Another highly placed Church worker told our correspondent that sequel to the development, members of the church decided that Mrs. Evelyn TBJoshua was forced to rise to the challenges of preserving and strengthening the good legacy left behind by her husband.

“Before the emergence of Evelyn Joshua as the leadership of the church through replacing her husband as Chairman Board of Trustees for the church by the Court ruling, she and her children had been pushed aside as ordinary church members. She was completely put in the dark of all activities. If she sent for them they would not come. An ordinary phone call to say hello became a big burden for them to do,” the source added.