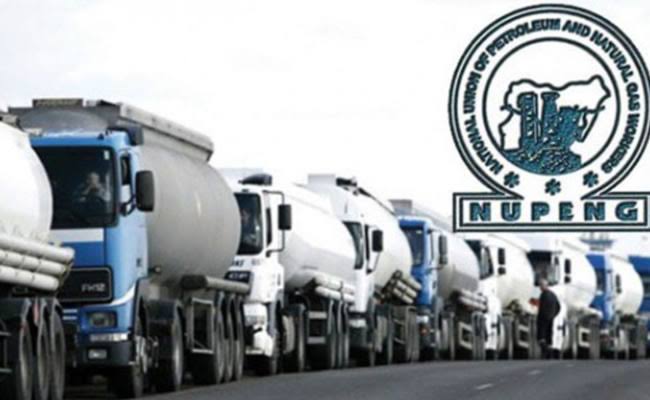 The National Union of Petroleum and Gas Workers (NUPENG) on Sunday said that the planned strike by its affiliate members, Petroleum Tanker Drivers (PTD), has been suspended.

The strike, which would have kicked off on Monday, disrupting fuel supply, was shelved because of the intervention by the Federal Government.

Mr Tayo Aboyeji, the South-West Zonal Chairman of NUPENG, disclosed this in an interview with the News Agency of Nigeria (NAN) in Lagos.

According to Aboyeji, the suspension is to allow union’s representatives and that of government to address the knotty issues at stake.

“The leadership of the union after a brief meeting with representatives of government decided to suspend the strike in the interest of the nation.
“The meeting with the government continues during the week with the assurance that the union grievances will be positively addressed,” he said.

NUPENG said on Saturday that the tanker drivers would commence strike on Monday over the deplorable state of the nation’s highways and other issues.

Aboyeji said the union has lost many lives and property due to bad roads.

“This is not the first time that we will signify our intention to go on strike but we have to call it off because it will generally affect majority of Nigerians but now our hands are tied,” he said.

See the full statement below:
The leadership of the Nigeria Union of Petroleum and Natural Gas Workers hereby announced the suspension of the intended withdrawal of the services of Petroleum Tanker Drivers earlier scheduled to commence midnight of Sunday, 10th October 2021 following the understanding reached with the Union by the management of NNPC at a meeting held in Ibadan, Oyo State, today, 10th October 2021 and the expected outcome of the follow up meeting that is scheduled to hold on Tuesday, 12, October 2021 in Abuja as contained in the communique issued today.

The suspension of our planned action is predicated on our belief that the understanding reached with the government today as well as at meeting of Tuesday 12th, October 2021 will be fulfilled to the letters.

We wish to clearly made it known to all well meaning Nigerians that have variously appealed to us on these issues that our planned was not intended to inflict further pains on Nigerians but to ensure observance of minimum safety on our highways for the good of lives and properties.

We are well aware of the impacts our actions usually have on the people, businesses and the nation at large but we cannot continue to watch as things continue to degenerate in our industry.

In the light of the above, the Union will not hesitate to re- commence the action without any notice if the understanding reached in these two meetings are not fully implemented within the timeframe agreed.

With this , our Petroleum Tanker Drivers are hereby directed to continue providing services for the efficient and effective distribution of Petroleum products to homes and workplaces across the country.

Our Solidarity remains constant for the Union makes us strong.