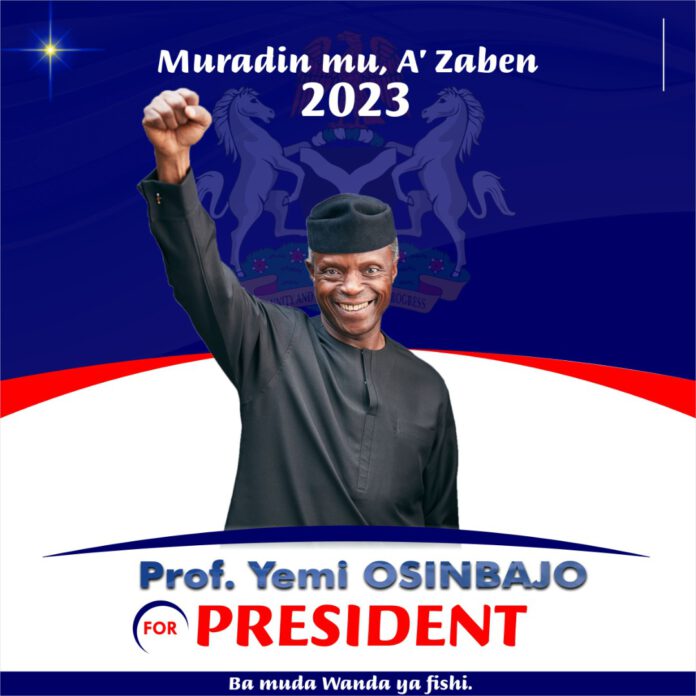 The campaign posters are visibly seen at strategic locations, including North Bank, High Level and  Wurukum areas of Makurdi metropolis with inscriptions: “Osinbajo For All 2023″ and are powered by a group: “Osinbajo For All Volunteer Group (OVG).

Coordinator of OVG, Mr. Ahule John and Secretary, Joe Akpode, told reporters in Makurdi, the state capital, that they believed that the Vice President has the capabilities to take the country to greater heights.

“Osinbajo For All Volunteer Group remains firmly committed to its stance that Osinbajo has all it takes to take this country to its place of destiny”, he said.

Mr. Ahule said OVG has been rooting for the possible emergence of the Vice President as the flagbearer of the All Progressives Congress (APC), saying as 2023 election approaches, the display of his posters in Makurdi is a move to restate the group’s commitment to the course.

He disclosed that the group has membership across various geo-political zones in the country with members being both young and old, adding that the Vice President or any of his relations or his staff members have no hand in how the organization was formed or being run.

“Let it be on record that Prof. Yemi Osinbajo didn’t mandate us to do this. He didn’t authorize us to mobilise for him. We are young and old men and women who strongly believe in his capacity. It is in him we think we can entrust our future.

“We, therefore, join our National Coordinator, Comr. Ogundeji Peter, excos with other state coordinators and members on the field across the country to continue to promote the ideas and ideals that our principal Vice President Osinbajo stands for.

“As youths, we demand a role model and we have found in him as one. We can no longer afford to fold our arms and allow just any person to shatter the Nigeria of our dream”.