The 10th China-Africa Think Tanks Forum was held in Hangzhou.

In the afternoon of October 20th, 2021, the opening session of the 10th Meeting of China-Africa Think Tanks Forum was held in Hangzhou, Zhejiang province.

As a companion warm-up event for the upcoming session of the Forum on China-Africa Cooperation (FOCAC) in Senegal, this Forum brought together more than 200 political, academic, media and business representatives from China and 15 African countries including South Africa, Senegal, Nigeria, Tanzania, Kenya, Morocco, Madagascar and Liberia.

The participants held in-depth and extensive discussions on the theme of “Strengthening Solidarity and Cooperation, Enhancing Innovation and Development to Build together a China-Africa Community with a Shared Future”, which strongly enhanced the deep understanding between China and Africa, promoted the development of China-Africa comprehensive strategic cooperative partnership, and played a role in building a closer China-Africa community with a shared future.

The opening ceremony was addressed by the following guests: Mr. Deng Li, Assistant Minister of the Ministry of Foreign Affairs of the People’s Republic of China, Mr. Abdoulaye DIOP, Minister of the Ministry of Culture and Communication of the Republic of Senegal, Mr. Zubairu Dada, Minister of State for Foreign Affairs of the Federal Republic of Nigeria, Ambassador Anil SOOKLAL, Deputy Director-General of the Department of International Relations and Cooperation of the Republic of South Africa, Mr. Felix MBAYU, Minister Delegate to the Minister of External Relations of the Republic of Cameroon, Ambassador Liu Guijin, the former Special Representative of the Chinese Government for African Affairs, Mr. Ahmadou Aly Mbaye, President of Cheikh Anta Diop University of Dakar, Senegal, and Mr. Tong Qing, Vice President of the China-Africa Capacity Cooperation Fund Co., Ltd. Mr. Jin Yonghui, Director General of the Department of Foreign Affairs of Zhejiang Provincial People’s Government delivered a written speech, sent by Zhu Congjiu, Vice Governor of Zhejiang Province. Mr. Zheng Mengzhuang, President of Zhejiang Normal University, presided over the opening ceremony.

The scholars shared their original research results and related new ideas and new thinking to the conference, and deeply interpret the profound value and practical significance of jointly building the China-Africa Community with a Shard Future, expressing fervent expectations of both sides. The plenary was chaired by Mr. Liu Hongwu, Director of the Institute of African Studies of Zhejiang Normal University, founder of the China-Africa Think Tanks Forum.

On 21th, around the three parallel sub-forum themes of “The New Plan for FOCAC and the Establishment of a China-Africa Community with a Shared Future ”, “Promoting Urban Development in African Cities and Towns, Deepening China-Africa Digital Cooperation and Jointly Building the BRI” and “Promoting Unity between China and Africa in the Fight against COVID-19 by Improving the Health Governance Capacity and the Quality of Medical and Health Services”, representatives from China’s and African universities, think tanks, government agencies, enterprises and other sectors combed through and theoretically discussed the results and experiences in various fields and levels such as political and security exchanges, economic development and trade cooperation, education and people-to-people exchanges, health and China-Africa medical cooperation, digital economy and governance digitalization, offering suggestions on new areas, new directions and new initiatives for China-Africa cooperation during the new Forum Cycle. 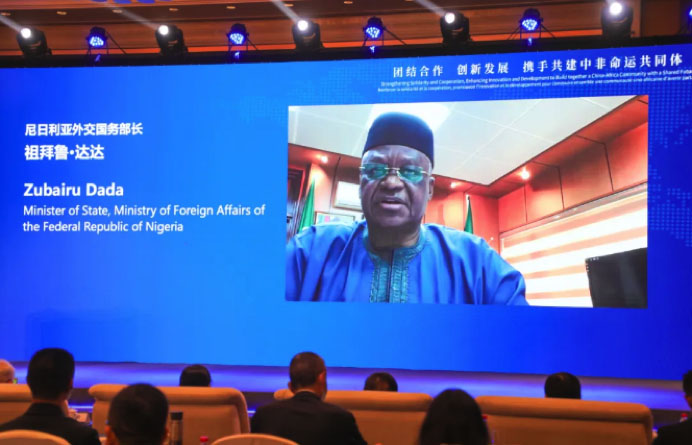 StarTimes participated as a media partner of the conference. William Ma, Overseas PR Director of the group, shared opinions on the panel regarding value and contribution of media in the prevention of epidemics in Africa, which includes to promote anti-epidemic information through comprehensive media and facilities such as the “Access to Satellite TV for 10,000 African Villages” Project.

Mr. Wang Zhaowen, Former Party Secretary and President of the Reference News, Mr. Philani Mthembu, Executive Director of Institute for Global Dialogue, Mr. Ikaweba Bunting, Director of Mwalimu Nyerere Foundation of Tanzania, Mr. Luo Lin, Director of Academy of International and Regional Studies at Beijing Language and Culture University, Mr. Wang Wen, Executive Dean of the Chongyang Institute for Financial Studies of Renmin University of China, etc. made keynote speeches at the second plenary meeting. The closing ceremony of the conference was presided over by Mr. Chen Jiangfeng. Mr. Liu Hongwu made the summary of the conference, and Mr. Zhong Yijun, vice president of Zhejiang Normal University, delivered a speech.

During the meeting, the organizers also held a number of thematical exhibitions, such as Zhejiang Normal University African Research Exhibition and the Foreign Affairs (Hong Kong and Macao) Work Photo Exhibition (the painting and photography exhibition) to commemorate the 100th anniversary of the founding of the CPC. Sino-African Development Cooperation :Studies on the Theories,Strategies,and Policies,written by Liu Hongwu and Luo Jianbo, China-Africa Intellectual Cooperation on Good Governance ——Reports of China-Africa Think Tank Forums（2010-2019）co-written by Wang Heng and others, and other newly-published foreign language academic literature were firstly exhibited and attracted much interests from the visitors. “These publications are of strategic importance for promoting and deepening China-Africa relations,” said Ambassador Gert, the former South African diplomat. 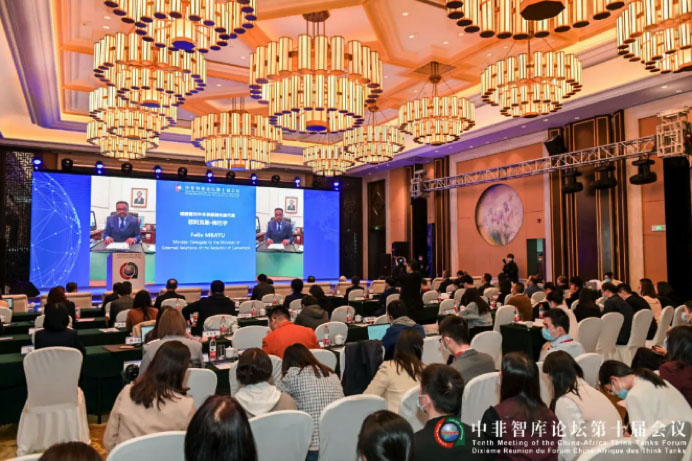 Mr. Liu Hongwu stated that in the historical process of Chinese learning approaching to the world academic arena, the Institute of African Studies of Zhejiang Normal University has actively promoted the translation of original academic achievements into foreign languages and international dissemination, and are striving to enhance the capability of Chinese and African scholars in interpreting and academically illustrating the China-Africa relations in an international discourse context.

After careful preparation, the Institute of African Studies planned such new -era academic programs as “Africans on China”, “Chinese on Africa” and “Africans in China on China-Africa Relations”, which serve as an important measure to carry out the spirit of General Secretary Xi Jinping’s speech at the Symposium on Philosophy and Social Sciences in 2016. At present, eight books of “African Studies Series” written by Chinese and African scholars, including Seventy Years of China-Africa Relations: Significance and Influence—A Chinese Scholar’s Observations in Academic Journey to Africa, have been delivered to the press. They are expected to meet with the public in 2022.

The China-Africa Think Tank Forum, one of the important forums under the framework of FOCAC, was founded in 2011 by the Institute of African Studies of Zhejiang Normal University, and has just been in its 10th year since. Over the past decade, the Forum of China-Africa Think Tanks, with the aim of “people-oriented, government participation, frank dialogue and consensus-building”, has held nine sessions in China and Africa under the guidance of the FOCAC Office of the African Department of the Ministry of Foreign Affairs, effectively promoting China-Africa exchanges and mutual understanding, and serving as an important platform for Chinese and African academia and think tanks to jointly promote the implementation of China-Africa comprehensive cooperation and provide independent knowledge products and intellectual wisdom for developing countries.

Over the past decade, the China-Africa Think Tank Forum has been fruitful and far-reaching in results and influence. In 2012, the forum was formally incorporated into the framework of FOCAC. In 2013, then State Councilor Yang Jiechi attended the third session of the China-Africa Think Tank Forum, noting that the forum has set up a mechanism platform for exchanges between Scholars from China and Africa think tanks and has strongly promoted China-Africa ideological exchange dialogue. 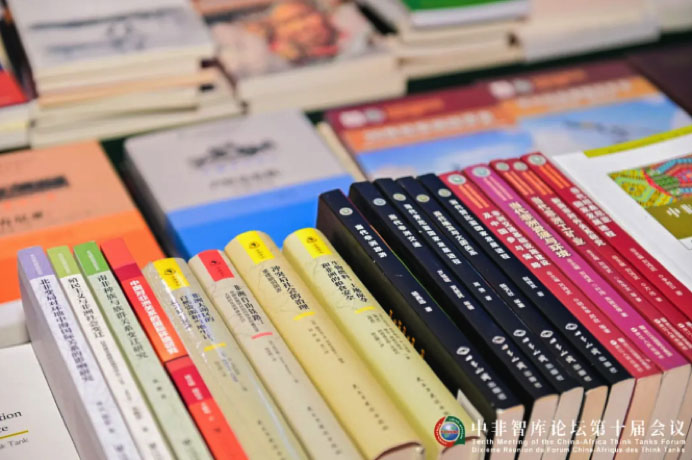 As one of the founders of the China-Africa Think Tank Forum and the main organizer, the Institute of African Studies of Zhejiang Normal University adheres to its deep commitment to African studies and has manifested extensive domestic and international influence. The institute has been selected as “the Best Regional Research Center (University- Affiliated)” of the Global Think Tank Report of the University of Pennsylvania for five consecutive years since 2016. There are only 32 global think tanks on the list, and only three in China.

The BBNaija ‘Shine Ya Eye’ House is a breathtaking masterpiece!