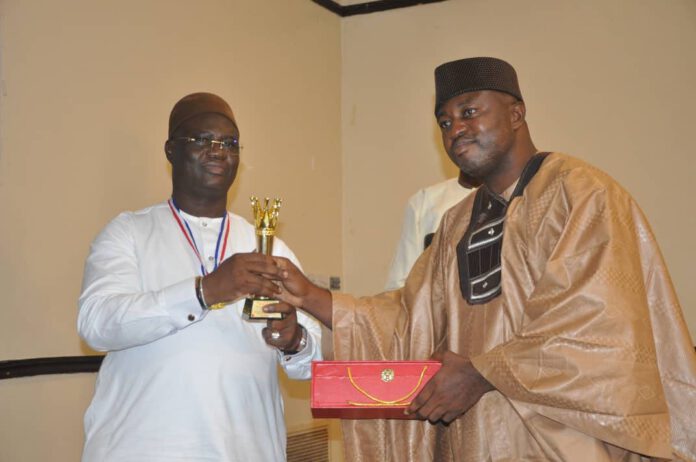 ...as stakeholders laud his reformation of maritime labour union

The President General of Maritime Workers Union of Nigeria (MWUN), Comrade Adewale Adeyanju was at the weekend, decorated with the Association of Maritime Journalists of Nigeria (AMJON’s) medal and award as the best labour leader in Nigeria in the year 2021.

Comrade Adeyanju is the first labour leader to bag such prestigious award from the maritime press for his exceptional brilliancy in workers welfare and transparency while dealing with employers from the Nigerian maritime industry.

While speaking at the just concluded 2021 edition of AMJON Conference/Awards held at the Lagos Sheraton Hotel, Ikeja, the labour leader reiterated the union’s commitment to workers’ welfare and industrial peace and harmony in the maritime sector.

Comrade Adeyanju who is also a trustee executive of the Nigerian Labour Congress (NLC) pointed out that the journalists play key role in the shipping industry stressing the need for stakeholders in the industry to pattern the association for effective and efficient dissemination of positive information.

He called on the various journalists’ groups in the sector to collaborate and speak with one voice. The labour leader urged organisers of the event to embark on investigative journalism.

Comrade Adeyanju tasked the maritime media association to also think outside the box and ensure that they embrace proactive reportage mechanism for the sector growth.

The MWUN boss urged executives of AMJON to stay focus ; while describing members of the association as a responsible group of pen pushers.

He stressed the union’s collaboration with AMJON to further project the industry positively .

While presenting the award to the labour icon, former President of the association,Mr. Ismail Aniemu described Comrade Adeyanju as a leader with a difference.

He said under the leadership Comrade Adeyanju, dockworkers , seafarers,shipping and workers of NPA enjoyed industrial peace and harmony, urging him to sustain the tempo.

Aniemu thanked the leadership of MWUN for their participation in the year’s event , stressing the need for a symbiotic relationship between AMJON and the union.

In a similar development, the Vice President of Association of Nigerian Licensed Customs Agents (ANLCA), Dr Kayode Farinto has described Comrade Adeyanju as the best thing that has happened to the maritime workers union of Nigeria in recent times.

According to him, the union was in doldrum untill the coming of Comrade Prince Adeyunju. “You brought back vibrancy in the Maritime Union, now everybody knows that the dockworker must be given his due regard and respect because without them, the logistic chain is incomplete. Thank you very much sir for the good work you are doing,” Dr Farinto said.

Jamoh, Bello-Koko, Salim, others to be honoured by maritime journalists