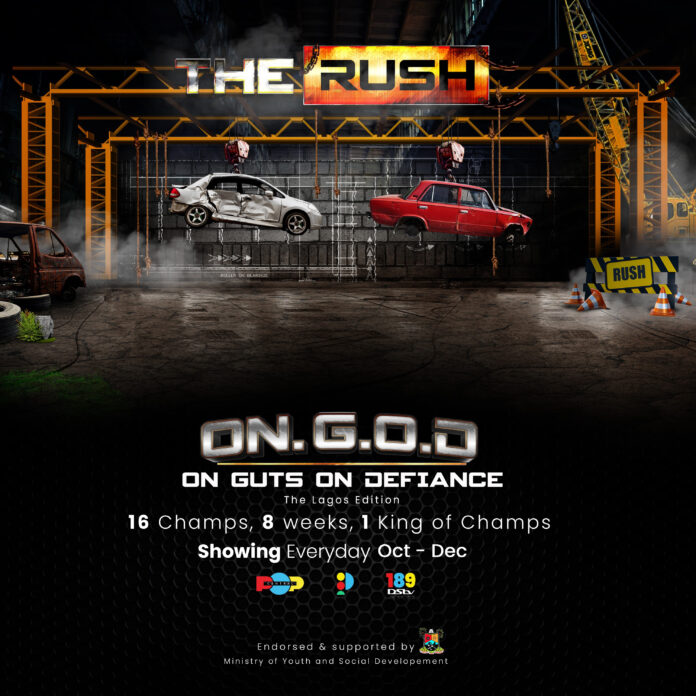 The Rush reality TV show created by Pop Central TV (DStv channel 18) has seen contestants from different parts of the country compete to become the King of Champs for the grand prize of 15 million naira.

The Rush has been quite unpredictable! Just when we thought some of the seemingly strong contestants would make it to the finals, they have had their dreams cut short – some much earlier, due to nominations and evictions. We have also witnessed unexpected contestants come strong in the course of this competition and they now have a shot at winning!

Let’s take a look at the 12 Champs up for possible eviction this week.

THOMAS – Thomas, who had done an impeccable job evading the previous eviction games is finally up for eviction. Being the first time he’s up for possible eviction, you almost can say he’s a champ certified for the finale.

PRINCESS – Princess has earned bragging rights after having survived two Destinies. Princess proves to be a cocktail of numerous features balancing her fierce nature with a budding love affair with another champ in the Residence (Ejiro).

FARIDA – Farida with the lucky charm! She had the highest nominations for eviction on team Raider in the first week but fate changed for her as she kept escaping nominations ever since, until last week.

IFE – After luckily picking the cube that led to him being the first Chief in the challenge, Ife has gone ahead to prove himself as a true teammate and worthy contender. He has challenged twice and earned himself N502,222 so far, Chief earnings inclusive.

LILIAN – Although Lilian has a calm demeanor, her skills and strength are obvious when she is in action and this has made her a fierce contender. She has been on the roll for nominations three times, luckily saved by the Chief once.

ADORA – After being saved by the Chief, Adora proved herself at Mayhem’s Pull-out games, challenges the Chief twice and has shown promise in the game. Although she’s earned her first nomination and faces the battle for redemption at Destiny, she’s done an excellent job evading the jaws of Destiny for 4 weeks straight.

DANIEL – Daniel is known for his several opinions and his linear beef with Evicted champ, Peter. Daniel is perceived by a few champs as the Antagonist, whereas he is really just there for the nutritious food & the title king of champs.

GIOVANNI – Giovanni who has grown cocksure and hungrier has become a strong contender to look out for, after he challenged the Chief and secured his immunity. When he’s not on the bleachers hurling motivation at his teammates, he’s in the arena brawling with any of the champs who dare to go against him.

ABISOLA – Abisola has mastered the art of staying top of the hierarchy and has shown grace and valiance thus far. From delivering a hat trick to winning the title of Chief three times consecutively, she has shown an exemplary display of leadership in Residence. She will go down in history as the first female Chief and the woman who did it thrice!

ANTHONY – Anthony might have not had the spotlight all to himself in the first few weeks in the challenge but has, however, wowed everyone with his performance at Destiny, completing an average of a 20 minutes course in 12 minutes. He has challenged the Chief twice, and survived Destiny once.

RHEMA – Rhema proves every day that strength does not exist in one form. She kickstarted the season being one of the first females to go nip n tuck with the Chief in the games of the Mackerel course. She’s taken down some of the most difficult challenges head on without fear and compromise and is determined to do the same in the challenges ahead of her.

Who will be evicted today and who would be left to compete for the ultimate prize? These are the questions on the lips of the fans. You have a chance to save your favourite champ by placing your vote online: https://mypoppinapp.com/index.php?/rush-contestants

Tune in to Pop Central (DStv channel 189) to catch the latest action this weekend on The Rush.

DStv customers can live stream the show on the DStv app, which is free to download from the Google Play and App stores. Sign up for DStv today by visiting www.dstvafrica.com to stay connected. Customers can also make use of the MyDStv app for self-service options or select the Auto-Renewal option for non-stop entertainment with no interruptions.

Programmes you should be watching this month on GOtv!