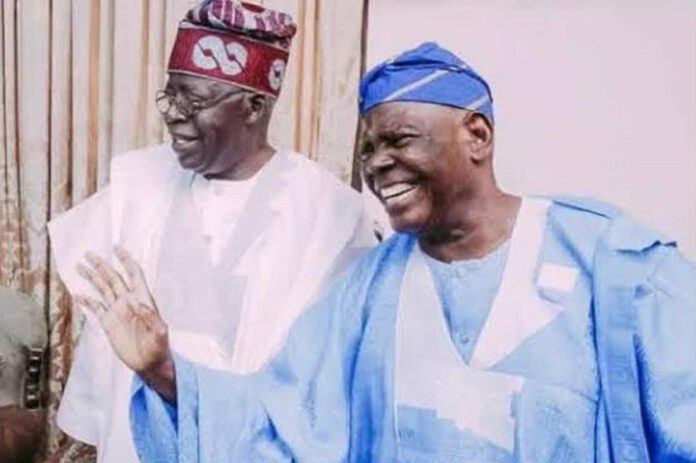 In ‘My Participation’, his recently released autobiography, Akande claimed that Adebanjo coerced Bola Tinubu, former Lagos governor, to build a house for him in Lekki.

“One day, Sir Olaniwun was launching a book at Muson Centre, Lagos. After the book presentation, Tinubu said I should not go and that he would like to see me. We met in a small room where he also invited Sir Olaniwun Ajayi. ‘Papa, you can see that this document is old, Tinubu said as he handed over a big envelope to Ajayi. This is your C of O (Certificate of Occupancy)!’” he wrote in the book.

“Tinubu told me later that after he presented Adebanjo’s C of O to him, Adebanjo was always pestering Tinubu until he helped built a house on the plot. The street was also named in honour of Adebanjo, and he is living in that house now at Lekki Phase One.”

Commenting on Tuesday during an interview on Arise TV, Adebanjo refuted the claims, adding that the former Osun governor is tied to the apron strings of Tinubu.

“He (Bisi Akande) is too junior to me to be commenting on political matters. He is a political neophyte. He is just an apron string of Tinubu,” he said.

“He is too junior for me to be commenting on what he said. I signed his papers to be governor. And the condition we gave for him to become governor was that of a sovereign national conference for the restructuring of the country back to federalism. That was the condition he was elected in 1999, and he reneged on that.

“They have sold out the Yoruba race to Muhammadu Buhari all because they want Tinubu to be president. That is not my business.

“But telling lies is the one I don’t know, and I don’t know how a man like Akande who claims that we all come from the root of Obafemi Awolowo can be taking pride in his participation in the government of one Buhari who they know is a disaster when all those who supported him initially are now regretting that they supported him.”