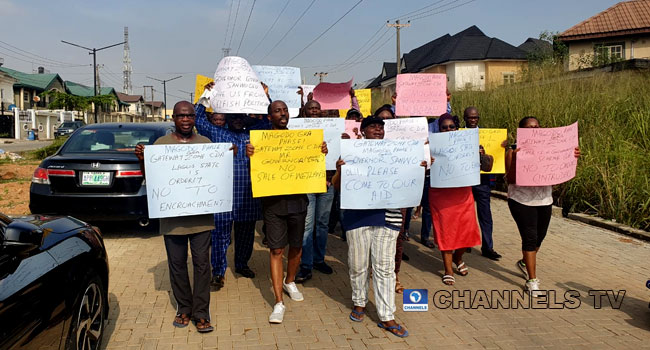 The Governor of Lagos State, Mr Babajide Sanwo-Olu, has visited the scene of the protest staged by Magodo residents over the planned invasion and demolition of their properties.

This is coming as police officers have begun to evict residents and forcefully take possession of houses in Phase 2, Magodo Estate, Lagos,

Officers deployed by Usman Baba-Alkali, the Inspector-General of Police (IGP), on Tuesday, locked some marked houses and forced out residents.

The officers, according to residents, marked their houses and used padlocks to lock their gates in a bid to prevent access.

During the invasion, the group used red, brown and blue inks to inscribe ‘ID/795/88 Possession Taken Today 21/12/21 by Court Order,’ on various properties on the estate.

It was learnt that it took the intervention of the Governor, Babajide Sanwo-Olu before the gates were reopened as the Inspector-General of Police, Baba Usman, promised to withdraw the policemen.

Speaking with our correspondent, the Chairman of the estate, Bajo Osinubi, said the policemen had remained in the estate despite Sanwo-Olu’s intervention, adding that residents had been living in fear as the policemen move around with their weapons.

He added: “More than 50 armed policemen are still around and they are restless and didn’t go for Christmas and New Year. In the morning and evening, they carry their guns around and you can imagine what will happen if there is a disagreement between the group and residents and somebody was shot, what will be the reaction of the IGP.”

This action was done to implement a Supreme Court ruling which found the Lagos State Government guilty of illegally possessing Shangisha Landlords Association’s 549 plots of land which form part of the estate.

However, the Lagos State Government had described the invasion as unwarranted and vowed to prosecute those involved in the invasion.

Also, the Legal Adviser, Magodo Residents Association, Tunji Abdulhameed, while countering the judgment claim influencing the actions of the invaders, said there was no specification to the area, property, location of the plots of land in the judgment they got in 1993.

He added: “But for you to execute even when you get a judgment, you must still apply for a writ of possession and without it, you cannot enforce the judgment. So, when they applied for the writ of possession and it was approved, we challenged it and that was the time the residents association joined the case as we were not part of the case before they got the judgment.

“The essence of the closure of the gate was to create awareness to the public and to draw the attention of the government as to what is happening in Magodo so that we can get protection from them.”