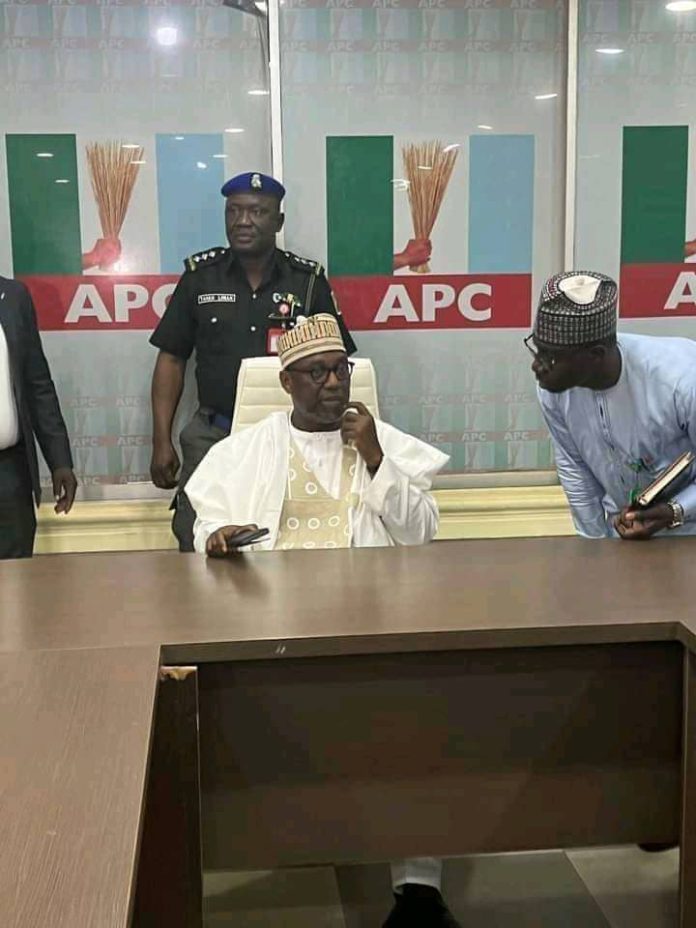 Less than three weeks to its March 26 national convention, the ruling All Progressives Congress, (APC) may have been enmeshed in another crisis of leadership.

What looks like a palace coup is playing out at the National headquarters of the party as governor Abubakar Sani Bello took reins of authority at the ruling party.

He arrived the party’s Secretariat in a show of force, accompanied by gun trotting policemen and went straight to the office of the of National Chairman of the party, Mai Mala Buni.

About nine of the 12- member Caretaker Extraordinary Convention Planning Committee (CECPC) are presently locked up in a crucial meeting being chaired by Sani Bello, who by the way is the Deputy Chairman of the Central Coordinating Committee of the March 26 convention. Senator John James Akpanudedehe, Secretary of the CECPC was also attending the meeting.

Earlier Akpanudedehe had dismissed as fake news the trending online news that Buni has been removed.

The whereabouts of the Yobe State governor is not known as at Press time.

There were reports last night of a crack in the CECPC as some APC Governors reportedly called a NEC meeting of he party.

Meanwhile, a top party source disclose Sunday night in Abuja that some forces want to capitalize on the absence of President Muhammadu Buhari to immediately convene such meeting and make far-reaching decisions which will be presented to the president on his return to the country.

“There are speculations that one of the governors has been trying to get his colleagues to support him in calling for a NEC meeting. It is nothing strange, except that the president is not around and they want to take some important decisions in his absence. There are those who often use their closeness to the president to sell their own ideas as the position of the party.

“The argument of those who oppose the NEC meeting is that the CECPC is was granted the powers of NEC when the Comrade Adams Oshiomhole-led National Working Committee NWC was dissolved in June 2020. This is for our lawyers to determine”, said the source.