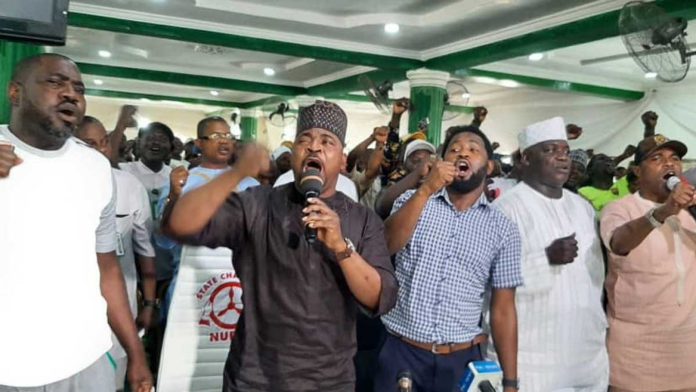 Embattled chairman of the National Union of Road Transport Workers Union in Lagos State, Musiliu Akinsanya, aka MC Oluomo, has ordered his lieutenants to stop issuing NURTW tickets to motorists in the state.

He also directed his foot soldiers at bus stops and parks in the state to only issue a certain N800 daily ticket to each commercial vehicle as ordered by the Lagos State Government in January 2022.

Akinsanya’s Media Aide, Jimoh Buhari, confirmed the development in a chat with our correspondent on Monday.

The PUNCH had reported that the Babajide Sanwo-Olu administration ordered danfo, taxi, and other commercial vehicles in the state to pay N800 levy daily effective February 1, 2022.

Speaking with our correspondent on Monday, Buhari said his principal directed all former members of the NURTW in the state to stop issuing the tickets of the organisation to commercial bus operators.

He said, “Following our withdrawal from the national body, chairman (Akinsanya) has ordered all our men at parks and bus stops to stop issuing NURTW tickets to commercial bus operators.

“They are only allowed to issue the N800 daily ticket introduced by the Lagos State Government in February. We were given that of February and that of March. That of March hasn’t finished before the crisis started. It is not a hidden thing; the government also issued the N800 ticket to other unions in the state including Road Transport Employers Association of Nigeria and the Motorcycle Operators’ Association of Lagos State.”

The PUNCH had reported that the national body of the union last Thursday suspended Akinsanya following weeks of protracted conflict and leadership tussle.

The national body had accused Akinsanya of resorting to intimidation, harassment, and assault on the newly-appointed Chairman, Tricycle Owners and Operators Association of Nigeria, Azeez Abiola, aka Istijabah but Akinsanya refuted the claim that he instigated members of the union to assault Abiola.

MC Oluomo: Lagos Assembly okays appointment of parks manager over NURTW crisis
He had, however, noted that the legality of the TOOAN operations in the state is a subject of a suit pending before the National Industrial Court.

Subsequently, the NURTW national body in Abuja last Thursday announced the indefinite suspension of Akinsanya for gross misconduct and directed him to hand over to his deputy.

Hours later, Akinsanya at a press conference at the NURTW Secretariat in the Agege area of the Lagos announced his withdrawal and that of lieutenants from the union.

He had also asked Sanwo-Olu to take over the running of all parks and garages in the state till peace returned to the union.

There were viral reports (not The PUNCH) last week that Sanwo-Olu appointed Akinsanya as the General Manager of the Lagos Transport Parks and Garages Committee but the government said the report was false.

According to a 2021 report by the International Centre for Investigative Report, the Lagos chapter of NURTW generates about N123.08bn annually, which could service the annual budget of Nasarawa, Niger, and Yobe states put together.