Home Interviews First Lady Olena Zelenska warns no one in Ukraine is safe from... 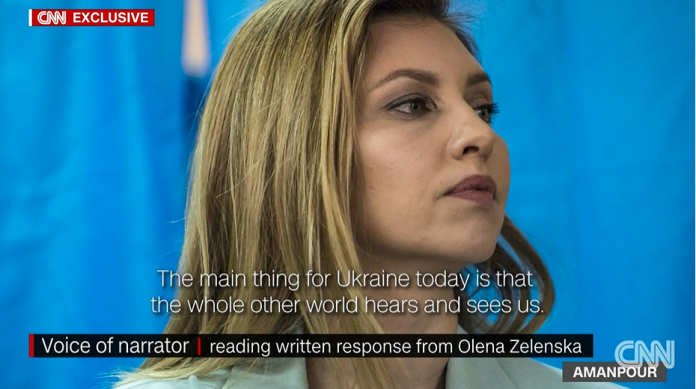 When Russian troops invaded their homeland, Ukrainian President Volodymyr Zelensky and first lady Olena Zelenska refused to flee or to give in, opting instead — like many of their countrymen and women — for defiance in the face of aggression. While the President’s focus has been on the military fightback against Russian forces, the first lady has concentrated on humanitarian and children’s issues, working to raise global awareness of ordinary Ukrainians’ suffering as a result of the war. CNN’s Christiane Amanpour interviewed Zelenska over email. Her responses have been translated from Ukrainian.

Madam first lady, given everything that is going on, how are you and your family holding up?

It’s like walking a tightrope: If you start thinking how you do it, you lose time and balance. So, to hold on, you just must go ahead and do what you do. In the same way, as far as I know, all Ukrainians hold on.

Many of those who escaped from the battlefields alone, who saw death, say the main cure after the experience is to act, to do something, to be helpful for somebody. I am personally supported by the fact that I try to protect and support others. Responsibility disciplines.

When you became first lady, you pledged to make children a centerpiece of your work. How devastating has it been to see Ukrainian children, including your own, suffer through a war zone?

And so it was: Children and their needs were one of the main areas of my work, along with the introduction of … equal rights for all Ukrainians. Before the war we launched a reform of school nutrition, preparing for it for several years, to make it tasty and healthy at the same time so that children get sick less.

How do I feel now, you ask? I feel we were thrown years and decades back.

Refugees fleeing Ukraine arrive in Zahony, Hungary, on March 10. Millions of Ukrainians have fled their homes since Russia invaded in late February.

Now we are not talking about healthy food, but about food in general. It’s about the survival of our children! We are no longer discussing, as before, what is the best equipment for schools — [instead] education for millions of children is under question.

We can’t talk about a healthy lifestyle for children — the number one goal is to save [them] at all.

Half of our children were forced to go abroad; thousands were physically and psychologically injured. On February 23 [the day before Russia invaded Ukraine], they were ordinary European students with a schedule and plans for the holidays.

Imagine that you have built and renovated a house and just put flowers on the windowsill; and now it is destroyed, and on the ruin you must light a fire to keep warm. This is what has happened to our children’s policies and to each family in general.

Tell us about the work you have been doing to support Ukrainian women and child refugees? What more can the world do to help on this front?

I am working in several directions now. In the summer, we managed to create the summit of the world’s first ladies and gentlemen, and now my colleagues are real allies in this.

First, we evacuate our most vulnerable — children with [cancer], [those with] disability and orphans — to countries that agree to accept them for treatment and rehabilitation. The main route passes through Poland, and from there to other European countries.

Secondly, we are importing incubators to Ukraine to support newborns in cities that are being bombed by Russians. In many hospitals there are power outages, and the lives of children are in danger. Therefore, we need devices that save lives without interruption. Two such devices have already been delivered and eight more incubators are planned to be delivered.

Third, we are accelerating the adaptation of refugees — children and their mothers — to the new location, because humanitarian aid alone is not enough: Children need accelerated socialization and school in a new place. In particular, this applies to thousands of children with autism who have found themselves abroad. We are now working to make it easier for them to access classes, otherwise their development will simply stop.

Together with the embassies, we are coordinating events in support of Ukraine — several international concerts have already raised money for humanitarian aid for Ukrainians.

Volodymyr Zelensky and Olena Zelenska attend a memorial service in Kyiv in February — shortly before the Russian invasion began.

Have you been able to see your husband since the conflict began?

Volodymyr and his team actually live in the President’s office. Due to the danger, my children and I were forbidden to stay there. So, for more than a month we communicate only by phone.

The whole world has been inspired by your husband’s wartime leadership of Ukraine. You married him in 2003 and have known him since you were both in university. Did you always know he had this in him?

I always knew that he was and would be a reliable support for me. Then he became a wonderful father and support for our family. And now he has shown the same traits.

He has not changed. It’s just that more people saw it through my eyes.

You have a 17-year-old daughter, Sasha, and 9-year-old son, Kyrylo. How have you explained the war to them? Are they staying with you?

Fortunately, the children are with me. And, as I said, when there is someone to take care of, it’s very disciplining. By the way, this also applies to the children themselves — they have grown dramatically during this time and also feel responsible for each other and those around them.

Nothing specifically needed to be explained. We are just talking about everything that is happening. When I watch the interviews of the children from Bucha or hear the stories of my friends about their children, I realize that children understand everything no better than adults. They look at the essence. As one young child said: “Why are Russians so mean to us? Apparently, they were beaten at home?”

You are reportedly the second highest target of Russian forces, after your husband. How do you keep your resolve in the face of such danger? What made you choose to stay in Ukraine?

For some reason I am constantly asked this question. But if you look closely, it becomes clear that every Ukrainian is a target for Russians: Every woman, every child.

Those who died the other day from a Russian missile [while] trying to evacuate from Kramatorsk were not members of the presidential family, they were just Ukrainians. So the number one target for the enemy is all of us.

Your husband has spoken directly in Russian to the Russian people, but it’s obviously difficult to reach them. Given the atrocities that have been committed to your people, do you have a message, particularly for Russian mothers and wives, that you think they should hear right now?

The level of Russian propaganda is often compared to Goebbels’ propaganda during World War II. But in my opinion, it exceeds [that], because in the Second World War there was no internet and access to information, such as now.

Now everyone can see the war crimes — for example, those committed by the Russians in Bucha, where the bodies of civilians with their hands tied simply lay in the streets.

But the problem is that the Russians do not want to see what the whole world sees, [in order] to feel more comfortable. After all, it is easier to say: “It’s all fake,” and go drink your coffee than to read the story of a particular person who died, look at her relatives and friends who are in grief.

For example, read the story of one of the victims [in] Bucha, a woman named Tatiana, who was shot by a Russian bullet, and her husband, who asked the invaders to take away the body, but was beaten and bound.

How to make Russians see this? I am more and more inclined to think that, unfortunately, not at all, they are blind in belief. They do not want to hear and see. I will not address them anymore.

The main thing for Ukraine today is that the whole other world hears and sees us, and it is important that our war does not become “habitual,” so that our victims do not become statistics. That’s why I communicate with people through foreign media.

Don’t get used to our grief!

On the first day of the war it became clear that there was no panic. Yes, Ukrainians did not believe in war — we believed in civilized dialogue. But when the attack took place, we did not become a “frightened crowd,” as the enemy had hoped. No. We became an organized community.

At once, the political and other controversies that exist in every society disappeared. Everyone came together to protect their home.

I see examples every day, and I never get tired of writing about it. Yes, Ukrainians are incredible.

And indeed, I write a lot about our women, because their participation is everywhere — they are in the armed forces and the defense forces, most of them are medics. And they are the ones who take children and families to safety. For example, only they can go abroad. So, in some ways their role is even more diverse than men’s; this is more than equality!

Editor’s note: This Q&A interview has been lightly edited for clarity and length.

Mariam Timmer Opens up on ‘The Real Housewives of Lagos’

Fanfaro Oil boss, Olayinka Olaoye speaks on many challenges in the industry