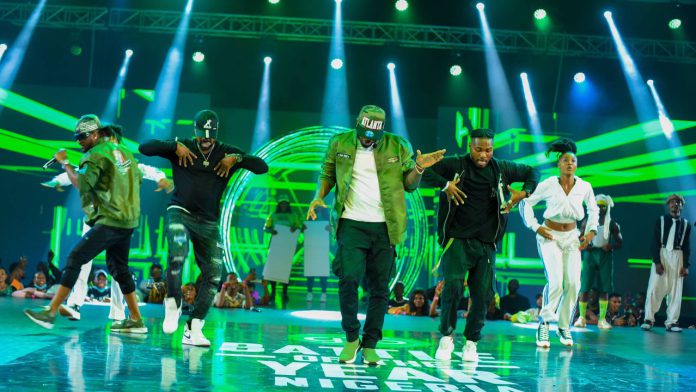 Entertainment lovers were thrilled to an evening of dance, music and comedy as the sponsor of Nigeria’s biggest dance competition and total telecommunications services provider, Globacom, held the Semi-finals of the much anticipated Glo Battle of the Year Nigeria national finals in Lagos.

The mega live event which held at the Eko Convention Centre, had dance lovers at the venue anticipating an evening of unlimited entertainment hours before the show officially started. Viewers at home were not left out as they connected live on GloTV – Globacom’s video streaming app.

Streaming through the expansive Green carpet, the excitement in the eyes of guests and the live audience was infectious. The pre-live show showcased among many exciting things, the quarterfinal dance battles for the Krumping, Locking, Popping, and Afro Dance categories. The Locking quarterfinals produced extra excitement as two wildcards- C Fly and Benedict, surprisingly made it to the semifinals. Benedict advanced to the final stage but was stopped by the eventual winner, Locking Mike.

The live show itself saw the culmination of the four dance category battles and also featured top flight comedy and music performances. The Popping battle had one of the fans favorite, Isikonko, emerge as the winner while Lil Conqueror triumphantly conquered the Krumping dance category.

The energy from the stage to the crowd was at its peak during the Afro dance finals. Angela from Abuja amazed the crowd with her truly African dance steps but was defeated by Izzy Twist in the finals. During their exhilarating comedy performances, ace comedians Bovi and MC Forever commended Globacom for giving dancers the opportunity to make a career out of dancing.

Another key highlight of the show was the spell-binding performance of Nigerian music super star Olamide, who performed some of his hit tracks. The excitement was heightened further with the electrifying performance of Peter and Paul Okoye, popularly known as Psquare, who kept the audience dancing and singing along for over forty minutes. It was truly a night of Unlimited Entertainment.

The grand finale of the Glo Battle of the Year Nigeria dance competition will take place on the 30th of April, 2022 and will feature the Bboy, Bgirls, and Breakdance Crew final dance battles. Nigerian and African music mega super star, Davido, alongside female music sensations, Simi & Teni, are equally billed to perform on the night.