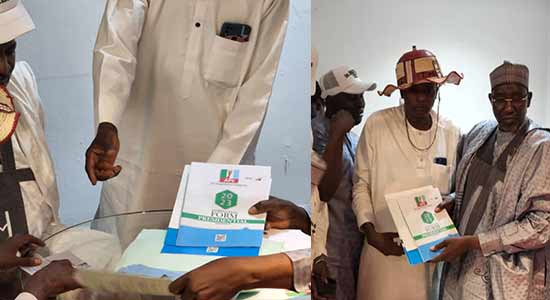 A coalition of northern groups has procured the All Progressives Congress (APC) presidential nomination and expression of interest forms for former President Goodluck Jonathan.

The forms were obtained from the International Conference Centre in Abuja on Monday.

Jonathan, who lost the 2015 presidential election to current President Muhammadu Buhari, is yet to officially declare his interest in contesting the presidency in the 2023 general election.

The development comes days after Jonathan had refused to give a definite answer when he was asked by some of his supporters, who had besieged his Abuja residence, on if he would contest the presidency.

“You are calling me to come and declare for the next election. I cannot tell you I’m declaring,” he had said.

“The political process is ongoing. Just watch out.

“The key role you must play is to pray that Nigeria gets somebody that carries the young people along — somebody that can also work very hard to see that some of the problems are addressed by the government and I believe, collectively, we will work together.”

The former president is yet to react to the latest development.

If Jonathan confirms his interest in contesting the presidency in the 2023 poll, he will be up against aspirants such as Vice-President Yemi Osinbajo, Bola Tinubu, former Lagos governor; Kayode Fayemi, Ekiti governor; Yahaya Bello, governor of Kogi; and David Umahi, governor of Ebonyi, for the APC ticket.

Zamfara Speaker to Deputy Gov: Your invitation has nothing to do...