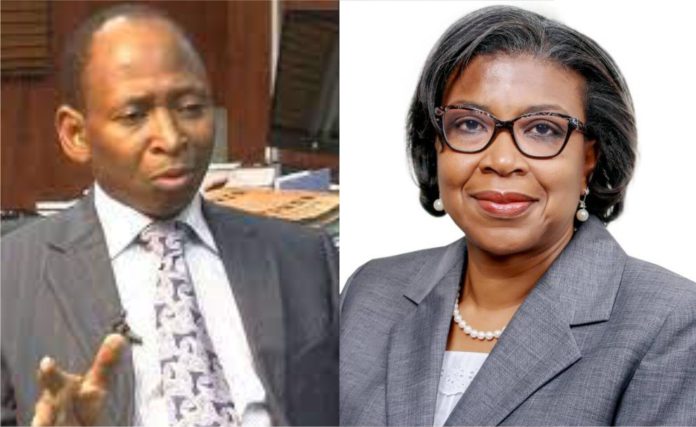 The Economic and Financial Crimes, EFCC, may invite Ms. Patience Oniha, the director-general of the Debt Management Office (DMO) as the anti-graft grills Ahmed Idris, the accountant-general of the federation (AGF) over allegations of money laundering and fraud, sources revealed.

Recall, that the operatives of the EFCC had arrested the AGF on Monday, May 16, 2022, in connection with diversion of funds and money laundering activities to the tune of N80 billion (eighty billion naira).

According to the commission, verified intelligence showed that AGF Idris raked off the funds through bogus consultancies and other illegal activities using proxies, family members and close associates.

The funds were said to have been laundered through real estate investments in Kano and Abuja.

We further gathered that part of the N80 billion which is being investigated by the EFCC includes a large chunk of a controversial N2.2 trillion which has been unaccounted for by the DMO boss and the accountant-general.

The figure was allocated to the DMO in the agency’s 2018 budget but unaccounted for.

The DMO boss, represented by the Office Director of Finance and Accounts, while being quizzed by the House of Representatives Public Accounts Committee, had said that although the figure was appropriated to it, it could only account for N721,251,798, which the Office of the Accountant-General of the Federation led by Idris released.
The director said it was the accountant-general that was responsible for the fund.

Committee chairman, Oluwole Oke, was however, curious that the DMO could not account for the amount that was appropriated for it, which did not also appear in the accountant-general’s books.

According to him: “We should hold you liable to the actual sum released to you if it is in the law that the DMO had a budget of N2.2 trillion. Now, where is the money? Who got it? Was it released? This is a law and the law says that N2.2 trillion had been given to DMO. Was the money given to the DMO? No. Who took the money? accountant-general? Why? If you are not the manager then it should not appear in your books but the books of the accountant-general of the federation,” he said.
The committee also wondered where the figure had originated from.

Sources noted that the DMO boss may be invited for interrogation by the EFCC to give details of the transaction.
Oniha reacts

When our reporter contacted the DMO DG for her angle to the development, she said the unaccounted funds were used to service loans from World Bank, African Development Bank, local and international investors in securities issued by the FGN but failed to provide documents to back up her claims..

According to her: “But think about it, if the Lenders to Nigeria (World Bank, African Development Bank, etc) and the local and international investors in securities issued by the FGN (FGN Bonds, Sukuk, Nigeria Treasury Bills, Green Bonds, Eurobonds, FGN Savings Bond) didn’t receive repayment of their principal or interest, will they not say so; that Nigeria has defaulted.

“For emphasis, I would say again, that the DMO does not receive the funds into its accounts. This is a statement of fact, not a denial.

Explaining further, Oniha noted: “At the hearing of the Public Accounts Committee of the House of Representatives, the Committee enquired about the utilisation of the N2.2 trillion provided in the 2018 Appropriation Act; of which N2.1 trillion was allocated for Debt Service and the DMO’s appropriation of N721,251,798.00, making it N2.2 trillion.

“The DMO explained to the Public Accounts Committee that the amount of N2.2 trillion was not available as the DMO’s total allocation since N2.1 trillion was specifically meant for servicing of Nigeria’s Domestic and External Debt. This explains why the Debt Service is expressly stated as a separate line item in the annual Appropriation Acts, while the DMO’s Expenditure is also stated separately.

“Indeed, the funds for Debt Service are never released to the DMO for spending, rather, in line with the mandate of the Office of the Accountant-General of the Federation (OAGF), the funds are domiciled with the OAGF, who on the advice of the DMO, effects payments directly to the creditors as at when due. Such creditors include multilateral and bilateral lenders like the World Bank, African Development Bank, Exim Bank of China, investors in Nigeria’s Eurobonds, as well as, investors in securities issued in the domestic market such as FGN Bonds, SUKUK, Green Bonds and Nigerian Treasury Bills,” she said.

Why Sunday Igboho has not disappeared from custody -Cleric explain

Okorocha: I was attacked by thugs, Imo government house police