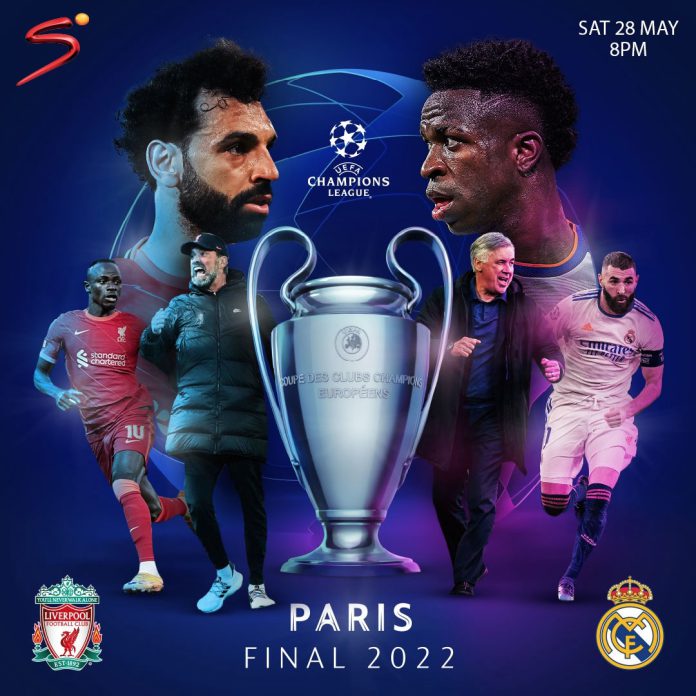 …as they face Real Madrid on Saturday

The Champion League is arguably one of the biggest football competitions at the club level. Players dream of competing in this stage, and clubs struggle to finish top in their leagues to compete at this level.

Of all the 32 Europe top clubs that jostled for the UEFA Champions League title for the 2021/2022 season, two clubs, Liverpool and Real Madrid, have made it into the final after what has been a nerve-racking competition.

On Saturday, May 28, 2022, these two football giants will go toe to toe against each other at the Stade de France Stadium, Paris. It will be a football encounter packed with action, emotions, thrillers, and suspense. Before the Referee, Clement Turpin, blows the whistle and the action begins, Real Madrid and Liverpool fans will join as both teams sing the UEFA Champions League anthem, chorusing We Are The Champions.

But one club must be victorious and lift the trophy of the 67th season of Europe’s elite club competition (the 30th since it was renamed the UEFA Champions League). Who is it going to be?

The much-anticipated match will be live on DStv Channel 203, Channel 205 and the newly introduced GOtv Pop-up Channel 38. There is no reason to miss the game, as you can live stream the actions on MyDStv. Simply download the app on the Google play store and watch at no extra cost.

There might be some reasons why this final will be a memorable one.

May 26, 2018, will be a day most Liverpool fans will easily not forget. At NSC Olimpiyskiy Stadium, Kyiv, Ukraine, the hopes were high as Liverpool and Real Madrid faced each other for the second time in the history of the UEFA Champions League. But just a few minutes into the match, Liverpool’s talisman, Mohamed Salah, was fouled by Ramos in a tackle that dislocated the Egyptian’s hand. Salah couldn’t carry on and, with tears, was substituted four minutes later.

The game changed. Real Madrid will cling on to the title for the 13th time, winning it three times in a row. While Klopp’s Liverpool bounced back a year later and won the title, Liverpool players and fans however feel they have a score to settle with Real Madrid despite Klopp’s denial that revenge is going to be a strong motive going into the match. Perhaps no player in the Liverpool squad feels the need to avenge the 2018 loss more than Mo.Salah, and after four years of waiting, he would finally have his chance.

“I want to play Madrid. I have to be honest. City is a really tough team, we played against them a few times this season. But if you ask me personally, I would prefer Madrid. We lost in the final, so I want to play against them, hopefully, win it from them as well.” he said after Liverpool won Villarreal 5-2 on aggregate in the semi-finals.

But with 13 UEFA Champions League trophies to their cap, Real Madrid won’t be an easy feast. Real Madrid came back from behind to beat EPL title winner Manchester City, scoring two goals in quick succession in a master play that shocked many.

Real Madrid’s goal striker Karim Benzema, paired with Luka Modric in the midfield, and Vinicius Junior from the flank, the Spanish side have shown a ruthless attacking football against their opponent’s defence line.

In the Champions League this season, Benzema has 15 goals while the Frenchman carried the La Liga title as the league’s highest goal scorer with 27 goals and 15 assists.

Both teams are made of interesting stars. As Benzema, Modric, and Vinicius, try to break Liverpool’s defence line, which is expected to include Alexander Arnold, Ibrahim Konate and Van Dijk, Liverpool’s attackers Salah, Mane, and  Luis Diaz will no doubt mount pressure on David Alaba and Ferland Mendy.

At the end, whether the game is decided by a shoot out or not, one team will win on Saturday. Which team will have their way and be crowned the Champions of Europe?

Catch every thrilling moment on SuperSport Premier League (DStv channel 203) and SuperSport Football (DStv channel 205) and GOtv Pop-up Channel 38 at 8pm. Download the MyDStv app to subscribe or upgrade or set up Auto-Renewal to stay connected without interruptions. Existing customers can also dial *288# to recharge.

Missed a game? Not to worry, record it or rewind to re-watch highlights with DStv Explora. On the move? Also, stream your favourite games on the go with the MyDStv app.