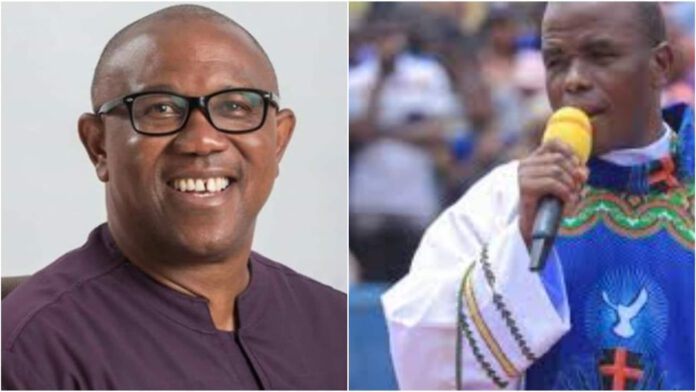 Peter Obi, presidential candidate of the Labour Party (LP), says Ejike Mbaka, spiritual director of Adoration Ministries, Enugu, Nigeria (AMEN), remains his father in faith no matter what he does.

On June 16, TheCable had reported that Mbaka said Obi cannot be Nigeria’s president because he is “stingy”.

“It is better to have an old man with a generous spirit than to have a young man with ‘gum’ hands. Peter has a curse, he is not going anywhere if he doesn’t come to kneel down on this adoration altar,” the priest had said.

The comment had elicited criticism, after which Mbaka apologised over the remark.

However, the bishop of Enugu had banned Catholics from attending the adoration centre — a decision which resulted in a protest on Sunday.

But Mbaka dissociated himself from the protest, saying he remains under the authority of the Catholic church.

In an interview with Voice of the People 90.3FM, streamed on YouTube on Sunday, Obi said despite the remark, he will always respect Mbaka as a priest.

“For me, Father Mbaka is an ordained priest of God and as a priest, he remains my priest and I will always respect and show my allegiance to the church,” Obi said.

“And whatever he says, I take, because he is my father, he is my father in faith and I respect him any day. He is my brother. We are very close; that’s my own. And whenever he says something wrong, I pray over it. If he says something right, I pray over it. So, mine is prayers and whatever he does, I love him. This is me because he is a priest of God.

“I don’t have any problem with him. Whatever he says, I put it in prayers. If he says I’m not going to be voted because I don’t have money, my prayer is may God make these people who are collecting money to vote to see reasons why they should not do so. That’s prayers.

“In fact, I had travelled when he said that. If I was there, I would have told him ‘since you’ve seen this, pray for me to overcome it’. That’s what I tell to every pastor. I meet pastors everyday who tell me ‘Peter, this is what is going to happen’. And I tell them ‘since you’ve seen it, let’s pray that it doesn’t happen’.”