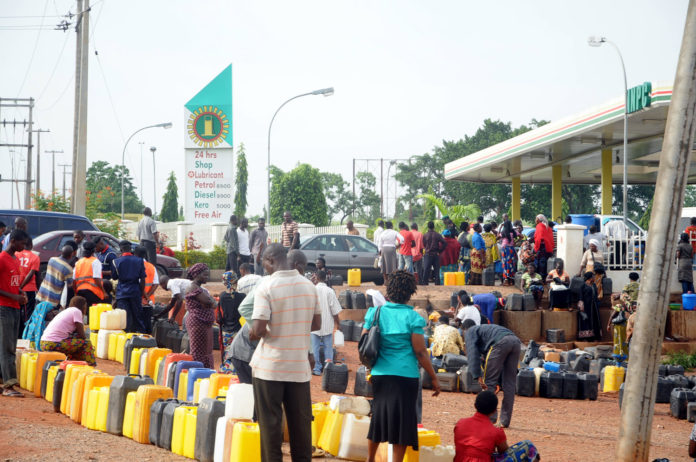 There are indications that the challenges confronting the distribution of Premium Motor Spirit (PMS) may not abate for as long as the price of crude oil is above $100.

Sources at the Nigerian National Petroleum Company (NNPC) said in Abuja, that the global supply system, which has led to the rise of crude oil beyond $120 per barrel, is one of the reasons supply will be a challenge for the foreseeable future.

Coupled with the hesitation of the Federal Government to develop a policy on the downstream sector amid dwindling foreign exchange, the country may have found itself in a precarious situation.

While the crude oil export receipts continue to dwindle, leading to the NNPC not being able to make remittances to the federation account, the continued subsidy regime is emerging as an albatross for the states and the Federal Government.

Meanwhile, a team led by the Executive Director, Distribution Systems, Storage and Retailing Infrastructure (DSSRI), Ogbuko Ukoha, has been dispatched to Lagos by the Authority Chief Executive, Farouk Ahmed, to restore normalcy.

Were told yesterday that Farouk, who was well briefed by his team, took a decision to ensure distribution is unhindered.

NMDPRA also said there is no increment in the ex-depot price, saying, “There is no way a price adjustment would be done without official communication. When the President approved additional N10 for transporters, it was announced to the Nigerian public.

“In this case, there is no decision on the pump price increment. The team that was dispatched to Lagos will interface with marketers, NNPC and other government agencies in the entire supply chain to ensure everyone is on the same page. NMDPRA is fully aware of its responsibilities and it is discharging it diligently.”

On its part, the Nigerian National Petroleum Company (NNPC) appeared not to have an answer as the scarcity of petrol hits productive hours of Nigerians.

The spokesperson of the company, Garba Deen Muhammad, did not respond to the messages sent to him requesting for clarification on the scarcity.

We leant on Monday, written to NNPC over the scarcity without any reply. A follow-up call yesterday was not responded or replied before this report was filed.

NNPC is the sole importer of PMS into Nigeria and currently has approval to spend nothing less than N4 trillion on the payment of subsidy this year.

An insider familiar with the prevailing development told The Guardian that two ships loaded with PMS had been unable to discharge the product at the Pinnacle Depot around the Dangote Refinery in Lekki.

The source disclosed that an attempt to discharge the product, the ship, had led to a breached part of infrastructure at the depot while the repair of the damaged infrastructure, which is necessary for off-loading, had been elusive for almost three weeks.

In the last weekly evacuation notice released by NNPC on the 16th of this month, no loading was done at Pinnacle. The weekly national PMS Evacuation Report for 30th May to 5th June, 2022 showed that 42.3 million litres of PMS was loaded from the facility in the period.

Also while the NNPC supplied 79.50 million litres in the last week of May into the first week of June, truck out for the week 6th to 12th June, 2022 went down to about 65 million litres.

This created a deficit of almost 14 million litres daily. While the NNPC did not release the data for the week from 13th to 19th of June, some marketers told The Guardian that the truck out to the market is now unbearable.

They equally noted that the sole importer had pushed almost half of its products to Pinnacle instead of spreading it across depots.

In Abuja yesterday, most fuel outlets were still under lock as motorists spent hours to buy products from the few that were dispensing. Most of the stations dispensing depended on only one or two pumps.

Indeed, some industry players are also worried by the high price of diesel, aviation fuel and kerosene, which have all been deregulated.

We learnt that this was part of the reasons advanced by government officials for delaying the removal of subsidy.

It was also gathered that handlers of President Buhari fear the backlash that will ensue if the subsidy is removed. Though this position was counterbalanced by the Minister of Finance, Budget and National Planning, Dr Zainab Ahmed that the subsidy burden may be too much for the fragile economy, it was feared that the rising cost of living and galloping inflation coupled with unemployment will exacerbate the already dire situation.

It was learnt that the Minister of State for Petroleum Resources, Timipre Sylva, is not favourably disposed towards the removal of subsidy.

Therefore, the government is in a fix.

An adviser to the Senate Committee on Petroleum Resources (Upstream), Dr Francis Adigwe said removal of subsidy will stop oil theft as well as vandalisation of pipelines.

He explained that while it is true that the removal will cause momentary hardships, the economic fundamentals will balance out when implementation begins.

“Yes the removal is likely going to cause some momentary hardships especially for the low-income earners, such hardship will balance out as soon as implementation gets underway. At any rate, if Ghana, Benin Republic, Chad, Cameroun and Niger Republic are not running fuel subsidies, why should Nigeria do it? Are the people in those counties not surviving?

“Our economy will get better without petrol subsidies. In fact, it will be better because the issues of oil theft and pipeline vandalism will be reduced to the barest minimum. There will no longer be a market for such nefarious activities because the price of PMS in Nigeria will be almost at par with our neighbouring countries,” he stated.

Peter Esele said that those in the corridors of power who are pushing the continuation of the subsidy regime are the major beneficiaries.

He added that the Buhari government has never been serious about the removal of subsidy.

“I can say unequivocally that this government has never been serious about removing subsidies. The Minister of State even gave us a date that the subsidy will go. What then happened? They claimed that President Buhari halted the removal because he did not want Nigerians to suffer. Really? Why was a policy on removal of the subsidy not developed? Are they running the government on an hoc basis now? Leaders are elected to make tough decisions but this government has continually shied away from taking tough decisions but rather choose an easy way out,” he stated.

Esele called on the government to adopt a phased removal of subsidies.

He explained: “Why can’t the government remove the subsidy in phases. It could have been done in 2015 when it had a huge political capital. Why not remove it bit by bit? It could be 20 per cent every year till everything goes.”

Esele also claimed that marketers were pushed to increase pump price to N180 per litre because of additional levies they are forced to pay.

“Before now, the ex-depot price was N148 and now it is N165 per litre. Can they sell at the cost price and yet the NNPC is silent on the additional levies marketers are paying. The business of NNPC can no longer be done under the table. The company must come out and say if the ex-depot price has gone up.”