Home Politics Obasanjo: I made serious mistake picking Atiku as my running mate in... 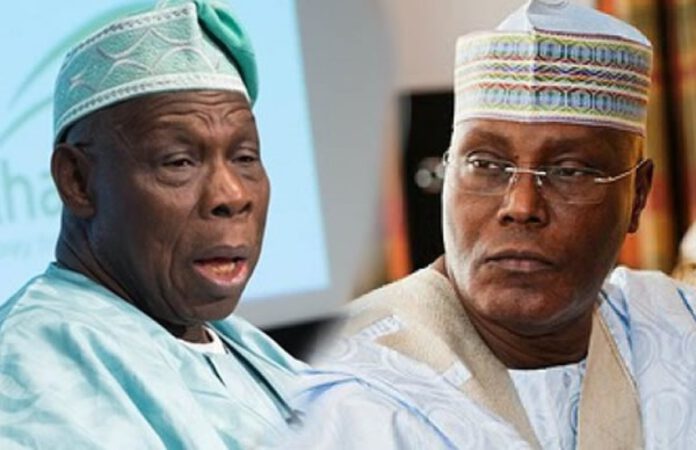 Former President Olusegun Obasanjo yesterday said that one of his mistakes in life was picking former Vice-President Atiku Abubakar as his running mate during the 1999 Presidential election.

Obasanjo, who described Atiku’s choice as his Vice President as one of his “genuine mistakes”, said despite making the mistake, God saved him in the end.

The former President made the disclosure while answering questions, posed by students from selected secondary schools that, participated in the final of the National Exhibition and Awards, organised by Students for the Advancement of Global Entrepreneurship (SAGE).

The event, held at the Olusegun Obasanjo Presidential Library (OOPL), Abeokuta, Ogun State, featured presentations and exhibitions of some products, made by students of the participating schools.

Obasanjo and his former number two man, Atiku had a running battle during the build up to the 2003 elections.

It is believed that Atiku, who is now contesting the number seat under the platform of the Peoples Democratic Party (PDP) worked against the third term ambition of Obasanjo and this led to the former President not supporting Atiku for his Presidential ambition.

Obasanjo, while reminiscencing on his life and achievements, both as Military Head of State and a civilian President, said he had made many genuine mistakes in his life, but God made him to overcome.

The former President, who interacted with the students in questions and answers session, said: “One of the mistakes I made was picking my Number Two when I wanted to become the President. But because it was a genuine mistake, God saved me.

“I will say there are many things that could have been a mistake but God saved me from them all”.

Obasanjo lamented the current trend of recycling of old politicians in elective positions, stressing that young Nigerians would not have chance to exhibit themselves if the trends continues.

While speaking on opportunities for the youths to take over the mantle of leadership in the country, Obasanjo bemoaned the trend of money politics in the country,  which according to him, would make it difficult for young Nigerians to participate in politics.

The former President however urged the youths to remain hopeful even in the face of money politics.

He said with the, “Not Too Young to Run” campaign, and you can see that those that are contesting now are between 70 and 80 years old. How can the youths run?

“Another thing inhibiting youth from running is the amount of money involved in going into politics. I hope that things should not continue like this.

“I was 39 years old when I became the Military Head of State. Twenty years later, I came back as civilian president, but those there now do not want to allow the youths. If things continue like this, I do not know how you can come in.”

The former President also tutored the students, that they should imbibe religious tolerance.

He advised them not to see their own religion as superior to that of another person.

Obasanjo said: “I have no right to say what another man believes in is inferior to mine. If God had wanted all of us to be of the same religion, he would have made it so and since He did not made it so, no person should attempt to make it so.

“If the basis of religion is doing the right thing for the benefits of mankind, you don’t have to condemn any person because of what he believed.

Welcoming participants at the event, the Chairman of SAGE Nigeria, Agwu Amogu, said the programme, was to celebrate the creative energies and commitments of teen entrepreneurs, who see the challenges in the communities as their responsibilities.

He said: “SAGE is an acronym for Students for the Advancement of Global Entrepreneurship. It is an international program initiated at the California State University, Chicago USA in 2002 and currently operational in over 32 countries across all the continents of the world.

“It offers secondary school aged young people a hands-on learning process on how to create wealth, help others and their communities.”

Amogu said since the introduction of the program in Nigeria in 2006, it had shown that it is a potent strategy and model for educational reform, youth re-orientation, job creation and poverty alleviation and multi-cultural integration

According to him, Nigeria urgently needed a new paradigm for education.

“The new paradigm must provide students with a chance to learn while solving community problems and immediately applying what they have learnt in the classroom by actually doing something great.

“We now live in a world where any country can compete effectively with others based on the creative imagination of its human capital.

“There is no better place to stoke the fire of imagination than in the young people. And that is where SAGE comes in.

“SAGE is about creating value.  Students are encouraged to create something of value in their communities by applying what they learn in the classroom and testing it in the ultimate laboratory…. the free market,” he said.

Amogu, who commended the feat of Nigerian students since the commencement of the programme in the country,  the country’s representatives , had been fantastic in the competition.

He said: “We firmly believe that Nigeria can be a world leader in providing potent human capital to the rest of the world; setting a benchmark for other countries to follow.

“Having won the SAGE World cup eight times in the last 12 years, I have no doubt in my mind that Nigerian young people are one of the most energetic and enterprising in the world and they can quicken our rise to a global super power status.”

The SAGE chairman said winners of this year’s competition, would represent Nigeria in the SAGE World Competition holding in Netherlands in August, 2022.

Okorocha: Nigeria needs a fatherly leader who will treat everyone equally