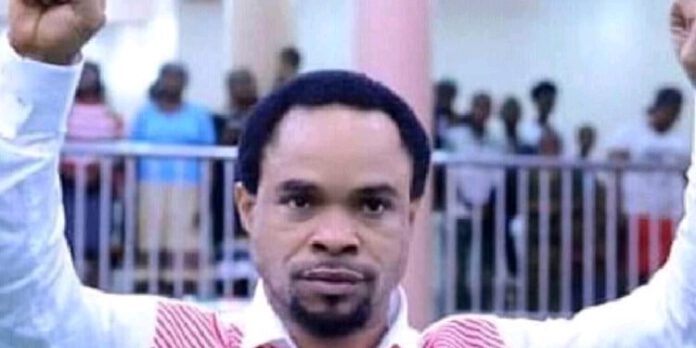 Controversial pastor based in Onitsha, Anambra State, Chukwuemeka Odumeje, better known as “Indaboski Bahose”, was on Thursday manhandled by security agents who accompanied officials that demolished his church.

The pastor who is popularly known as “Indaboski Bahose”, “Liquid Metal”, was manhandled while arguing with the officials.

In March, the Anambra government had marked his church, Grace And Power Prophetic Ministry, Onitsha, for demolition for sitting on drainage channel.

Governor Chukwuma Soludo had visited Okpoko, a sprawling slum in Onitsha, a day after his swearing in, and pledged to sanitize the area by ensuring the drainages are free.

Odumeje’s church, which is in the community, was marked among the houses obstructing free flow of water.

The controversial prophet had reportedly attempted to stop the officials from demolishing his church, drawing the ire of the security men who accompanied the demolition team.

In a video trending online, Odumeje was seen being shoved around by security men, including police officers and men of the vigilantes service.

He was severally slapped, and restricted from moving to the demolition area.

The video however sparked mixed reaction, with many condemning the treatment meted to the cleric.

However, some commentators said it served him right as he had invaded shrines that are considered sacred and destroyed them in the past.

Odumeje came to limelight through videos of his controversial sermons and bizarre style of healing. He usually imitates heavy weight wrestlers by smacking down his sick members for healing.

The cleric also claims to have many hidden powers, which he said were yet to be touched.

Commenting on the demolition, Chief Press Secretary to Anambra State governor, Mr Christian Aburime, said it has no sinister motive.

He said the government had given notice to all those whose building were situated on drainage.

He said: “Following the expiration of the more than two weeks notice beginning from April 2022 served on developers and building owners who built several illegal structures along the waterway in Fegge and environs within Onitsha, Anambra state government has begun demolition of such structures.

“The exercise which is being carried out by a joint government task force, commenced the exercise from Bida Road by Modebe Avenue, Fegge Onitsha. The affected buildings include Mountain of Holy Ghost Intervention Deliverance Ministries, shops and other perimeter fences.

“The structures were marked since April, 2022 and all developers and building owners were served notice to remove such illegal structures.”