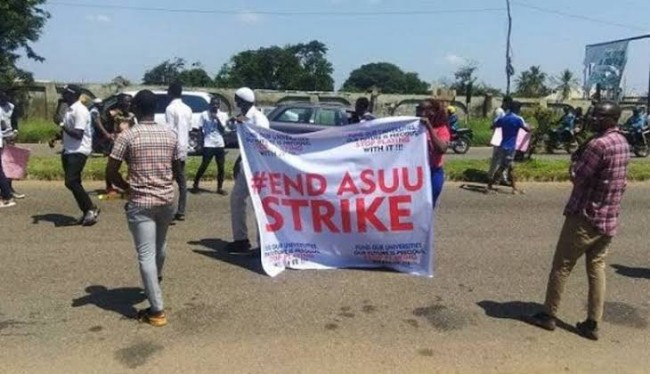 President Muhammadu Buhari has asked the Academic Staff Union of Universities (ASUU) to reconsider its stance on its ongoing strike.

The president said this on Monday in his address when some governors of the All Progressives Congress (APC), legislators and political leaders visited him at his residence in Daura, Katsina.

ASUU is currently on strike over the federal government’s failure to honour an agreement on issues bordering on funding of universities, as well as salaries and allowances of lecturers.

Speaking on the development, Buhari said the strike had already taken a toll on parents, students and other stakeholders.

“I hope that the institutions that we have like ASUU will sympathise with the country and the people. There is nothing wrong with showing the government and the leadership that you don’t like what they are doing. But enough is enough. Don’t hurt the next generation for goodness sake,” he said.

“Those of you who have friends that are teachers, please persuade them to go back to classes so that our children can resume their educational pursuit.

“People, whether they like it or not, are realising that to get educated to get government jobs is no longer [it]. Now, you get educated for the sake of education, because where are the jobs? The jobs are virtually finished.

“We should use it and try to tell people to please encourage their children to get educated for the sake of education, not for government jobs, because technology is cutting down the number of government jobs. The resources will be used for education and healthcare mainly.”