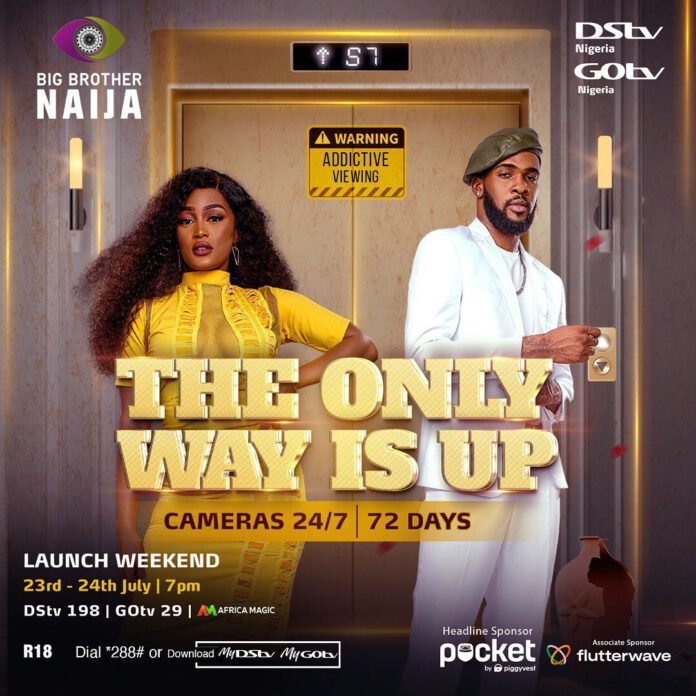 Speaking at the event, which was held at the Lagos Marriot Hotel, Executive Head, Content and West Africa Channels at MultiChoice Nigeria, Dr Busola Tejumola, revealed that Pocket by Piggyvest (formerly Abeg) will be returning as the headline sponsor for the show and joining as an associate sponsor, will be Flutterwave.

Abeg first sponsored BBNaija during its sixth edition in 2021 and reportedly grew its users from 20,000 to over 1.8 million, a 7000% increase due to the sponsorship. The Chief Marketing Officer at (Pocket) Piggyvest, Joshua Chibueze, who spoke at the media briefing on behalf of the brand, stated this, hence their return for a second season. The sponsorship, he revealed, is also essential in the light of Abeg’s rebranding as Pocket and the new features added to the platform.

Flutterwave also sponsored BBNaija in 2020. After sponsoring the show, the company reported an increase in monthly transactions from 107 million to 140 million. The Head of Branding and Storytelling, Flutterwave, Yewande Akomolafe-Kalu, noted that this also prompted their decision to support the show again this year. They believe their partnership with the reality show will be mutually beneficial.

As part of the announcements, Dr Tejumola also said fans should prepare for the burst of nostalgia they would feel when the show brings back its pre-Covid elements. She noted that the fan-favourite ninjas, the live audience and a few other features are back. Dr Tejumola also revealed that fans would love the redesigned BBNaija house and the other surprises the show will bring.

Perhaps the most exciting is the total grand prize. This season’s winner walks away with ₦100 million worth of prizes, including a cash sum of ₦50 million. Considering MultiChoice received over 40,000 entries, winning this year will be a feat worthy of millions. In addition, 30 fans of the show will also win 1 million Naira each in the Fave Lock-In promo exclusive to DStv & GOtv customers.

The show will retain its voting style from last year. Voting will only be on the Big Brother Naija website, mobile site, and the MyDStv and MyGOtv apps for active customers. The number of votes each subscriber will have will be determined by their subscription packages, with DStv Premium and GOtv SUPA subscribers receiving the most votes.

Here’s all that went down on the first part of the...