Home Politics Ahead 2023: PDP to meet Wike, other aggrieved members 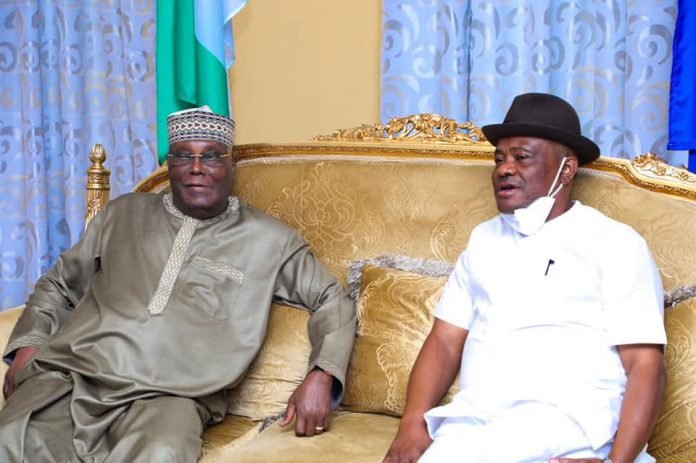 The Board of Trustees Chairman of the Peoples Democratic Party, Senator Walid Jibril Monday, said all plans were on ground to bring all party members, including Rivers State Governor, Nyesom Wike, and other aggrieved members together, ahead of the 2023 general elections in the country.

All has not been well with the main opposition party following the presidential primary election which produce former Vice-President Atiku Abubakar as the flag bearer of the party ahead of the 2023 general elections in the country.

However, Walid, a Second Republic Senator, said in a statement issued in Kaduna that there was no cause of concern as the party would do everything humanly possible to unite members.

He said the BOT members of the party were set to meet with the Rivers State helmsman and other aggrieved party members for reconciliation.

According to him, what was happening in the main opposition party cannot be compared with the ruling All Progressives Congress, especially their plan of bringing religious issue of the Muslim-Muslim presidential ticket.

He expressed delight over the recent meeting of governors of the party and other stakeholders geared towards reconciling aggrieved party members, especially Rivers State Governor, Nyesom Wike.

Walid further explained that the BOT being the conscience of party would meet on Wednesday as a follow-up to the meeting of the governors in order to unite party members ahead of the 2023 elections.

The party chieftain added that during the Wednesday’s meeting, a special committee would be set for the special reconciliation of aggrieved members especially Governor Wike.

The BOT Chairman said, “I notice with great concern what the  elections of Atiku Abubakar and the appointment of chief Okowa as president and vice president is unnecessary causing confusion among some PDP members.

“May I point out that very strongly that there is no any problem as being envisaged by some people in our great party the PDP.

“I want to assure everyone that all plans are on ground to bring all members together as one and united as what is happening in PDP can never be compared with the situation in APC especially their plans in trying to bring Religious issues of Muslim-Muslim president and vice president.

“I have also noted that some groups are coming up trying to solve the issues of Okowa as vice-president the latest group include some former governors of the party and the current governors, some BoT members and elders, including prof. Jerry Gana, the chief spokesman of the group, Governors Nyesom Wike(Rivers), Ifeanyi Ugwanyi (Enugu), Seyi Makinde (Oyo), Okezie Ikpeazu (Abia) as well as former governors Ibrahim Hassan Dankwambo (Gombe), Ibrahim Idris (Kogi) among others. The aim of the group is reconcile aggrieved members, especially Wike.

“Interestingly, the BoT the highest advisory body and the conscience of the party is meeting on Wednesday 3rd, August to discuss the issues accordingly by coming up with strong recommendations with the special committee for the special reconciliation of aggrieved members especially Governor Wike.

“After the BoT meeting, we will meet with Wike and all aggrieved members and all past presidential Aspirants. It is my prayers as Chairman of BoT that the PDP will remain strongest and win all elections in 2023.”

Tinubu to youths: You can’t be on Instagram and have no...