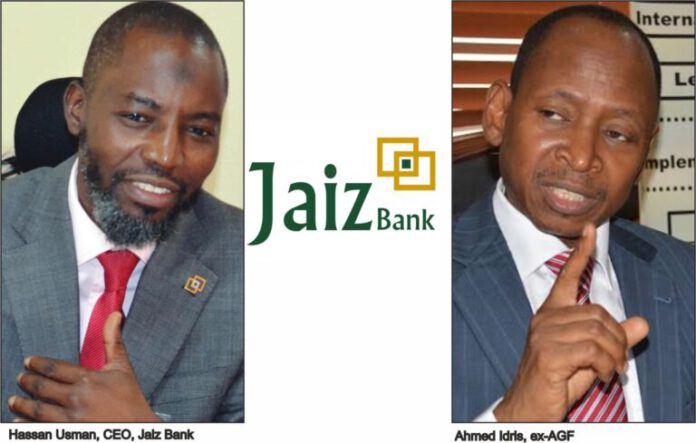 Hassan Usman, the managing director of Jaiz Bank Plc and other top officials of the Islamic bank may soon be invited for questioning by the Economic and Financial Crimes Commission, EFCC.

The invitation is based on their alleged roles in the N109 billion allegedly stolen by Ahmed Idris, the disgraced former Accountant General of the Federation, sources in the commission said.

Idris, who is currently being prosecuted by the EFCC alongside two other accomplices, Godfrey Olusegun Akindele and Mohammed Kudu had stolen the huge funds by compromising the Treasury Single Account (TSA), Government Integrated Financial Management Information System (GIFMIS), Integrated Payroll and Personnel Information System (IPPIS) and carted away billions of naira belonging to the government, the anti-graft agency said during his arraignment in last week.

The EFCC had upon investigations, discovered that the former Accountant General opened bank accounts with the Islamic Bank, and used the same to perfect his money laundering schemes.

Even though the magazine cannot ascertain the extent to which some officials of the bank were involved in the fraud, investigations revealed that the bank was used to launder a large sum of money to top government officials at the federal and state levels.

The Source Magazine learnt that the commission is now trying to unravel the possible underhand deals the former AGoF had with some officials of the Islamic bank that ‘allowed him to use the bank to launder public funds. The bank has serious questions to answer” an EFCC source said.

“The Accountant General and his accomplices must have chosen Jaiz bank, in order not to draw any suspicion from the public and banking regulators. But it’s now obvious that there’s no hidden place for the bank and greedy government officials who committed the fraud. The EFCC will get to the bottom of the fraud and expose those involved” another EFCC top official said on Tuesday.

“There is a need to question more top officials of the bank apart from the chief executive who must be privy to how and when huge sums of money were moved without deeming it fit to alert constituted authority in the country and EFCC. There’s no way huge sums will be moved without the MD’s knowledge, and we are quite sure these officials are not unaware of the money laundering law,” the official said.

A huge part of the stolen funds, the EFCC said were used by Idris to set up businesses and acquire properties in Kano where he hails from, and Abuja, amongst others.

Such properties include the Gezawa Exchange Limited, Gezawa Integrated Farms, and Kano City Mall, amongst others.

During the trial last week, an EFCC prosecution witness Hayatu Ahmed, said Idris has accounts with Jaiz Bank which he used to make payments to individuals and companies, including a N280 million he paid into “Gezawa Commodity Market with Jaiz Bank.”

It was also learnt from EFCC sources that many transactions the disgraced Idris had with bureau de change were done through the bank. “We have verifiable evidence that many bureau de change in Kano and Abuja were paid through the bank. The equivalent of the dollar value was then collected in cash, which were later paid directly to those who benefitted from the fraud,” the source said.

Giving a break down of the fraud last week, the EFCC witness said the stolen funds were shared by three groups, including officials of the Revenue Mobilisation Allocation and Fiscal Commission, RMAFC represented by one of its commissioners, Peace Akomas, former deputy governor of Abia State who allegedly collected N18.8 billion.

“The second group is the AGF group, and it got a total sum of N18.01 billion.

“The third group, the Commissioners of Finance in the nine oil producing states, received N21.4 billion. The money was withdrawn by Akindele, converted to US dollars, and handed over to Akomas on behalf of the group.

“The fourth group is called the Yari group. This group received N17.15 billion. The entirety of the sum was transferred to the account of Fimex Professional Services on the instruction of the representative of this group – Abdul’Aziz Yari, former Zamfara state governor.

“The remaining N8.9 billion was retained by the second defendant. Furthermore, N4.29 billion was converted to US dollars by Akindele as appreciation for the consultancy contract, and the balance of N4.6 billion was given to Akindele,” the EFCC witness said in court.

Africa FinTech Foundry to boost innovation and ‘Techpreneurs’ with 2021 ‘Accelerator’...

Bboys and Bgirls champions unite in Episode 8 of Glo Battle...