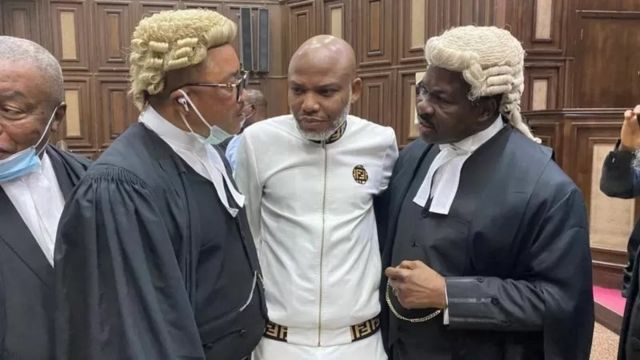 Nnamdi Kanu, leader of the Indigenous People of Biafra (IPOB), failed to show up at a federal high court in Abuja on Monday.

Kanu is being prosecuted on charges of terrorism.

When the case was called, Mohammed Abubakar, prosecution counsel from the office of the attorney-general, said Kanu refused to appear before the court.

“He has declined to come to court,” he said.

I. Awo, counsel to the Department of State Security (DSS), said Kanu woke up and refused to come to court.

“The defendant was intimated about today’s court session,” Awo said.

“I called the office to find out why and they said he woke up this morning and objected that he was not going to come to court.”

Mike Ozekhome, Kanu’s counsel, said the last time he spoke with his client, the IPOB leader expressed enthusiasm to be present in court.

“We are therefore surprised that that the same person has refused to come to court,” he said.

Binta Nyako, presiding judge, said the presence of the accused person was not necessary for the day’s proceedings since the matter was adjourned for parties in the suit to give a report on the status of the case.

After the parties briefed the court on the verdict of the court of appeal and pending appeals at the apex court, the matter was adjourned indefinitely pending the determination of the appeals.

On April 8, the trial court struck out eight of the 15 counts in the charge. The court of appeal later quashed the remaining seven counts on October 13.

Delivering judgment in the appeal, a three-member panel of the appellate court led by Hanatu Sankey held that the federal government flouted the Terrorism Act in violation of international conventions and treaties, hence, breaching the rights of the respondent.

The court further held that having illegally and forcefully renditioned the appellant, the trial court is stripped of jurisdiction to continue to try Kanu.

However, the federal government is yet to release the IPOB leader.

Instead, it filed an appeal before the supreme court to challenge the appeal court judgment.

It also filed an application seeking to stay the execution of the appellate court’s judgment.

Ruling on the application, the court of appeal granted the government’s request.

Kanu has also filed an appeal challenging his incarceration as well as another cross-appeal at the supreme court.