The children of the late Kudirat Abiola has maintained that their mother was killed on the orders of the presidential candidate of the Action Alliance, Major Hamza Al-Mustapha (retd).

Khafila Abiola, in a statement on behalf of Kudirat’s children, was reacting to a statement attributed to Al-Mustapha, where he claimed that Vice President Yemi Osinbajo coerced Seargent Jabila Mshiola, aka Sergeant Rogers, to implicate him (Al-Mustapha) during the 1998 Oputa panel.

At the panel, Sergeant Rogers confessed to had taken part in the assassination under Al-Mustapha’s orders.

Though Al-Mustapha was sentenced to death by hanging in 2012, he was later released by a court of appeal in Lagos.

However, in a recent interview published by Sahara Reporters, Al-Mustapha had claimed that Osinbajo, the then Attorney General of Lagos, coached Sergeant Rogers on what to say to incriminate him (Al-Mustapha).

Reacting to the interview, Kudirat Abiola’s children said in the statement, made available to The Momentng, “Our attention has been drawn to a recent statement made by Major Hamza Al-Mustapha.

“In it, he accused the current Vice-President, Professor Yemi Osinbajo SAN, of instigating Sergeant Rogers to falsely claim that he, Al-Mustapha, was behind the assassination of our mother, Alhaja Kudirat Abiola.

“First of all, we all watched the proceedings of the Oputa Panel where Sergeant Rogers freely stated that he assassinated our mother and attempted to murder Senator Abraham Adesanya and Chief Alex Ibru, late Publisher of The Guardian newspaper, based on the instructions given to him by Major Al-Mustapha.

“The evidence of Sergeant Rogers was not challenged by Al-Mustapha and his lawyers at the Oputa Panel.

“Second, the Lagos High Court convicted and sentenced the armed agents of Al-Mustapha to imprisonment for the attempted murder of Senator Abraham Adesanya.

“Third, the Lagos State High Court also convicted and sentenced Al-Mustapha and his accomplices to death for the cold-blooded murder of our mother.

“Their subsequent acquittal by the Court of Appeal was most likely politically motivated. The appeal filed against the judgment is currently pending at the Supreme Court.

“However, Al-Mustapha may be counting on the pervasive culture of impunity in Nigeria to not only attempt to deny his dastardly role in the assassination of a defenceless woman; but to also now contemplate running for office, along with Mohammed Abacha, who was alleged to have provided his driver to convey the assassins to carry out the mission.

“Impunity lays waste to the promise of the democracy for which our dear mother paid the ultimate price.

“As those that oversaw her assassination now seek to rewrite the history of what they did, we are forced to seek justice for our beloved mother within a jurisdiction not susceptible to the political games that hold sway in Nigeria.

“Justice may be delayed but it must not be denied.”

Kudirat, the wife of late Chief MKO Abiola, was assassinated on June 4, 1996. 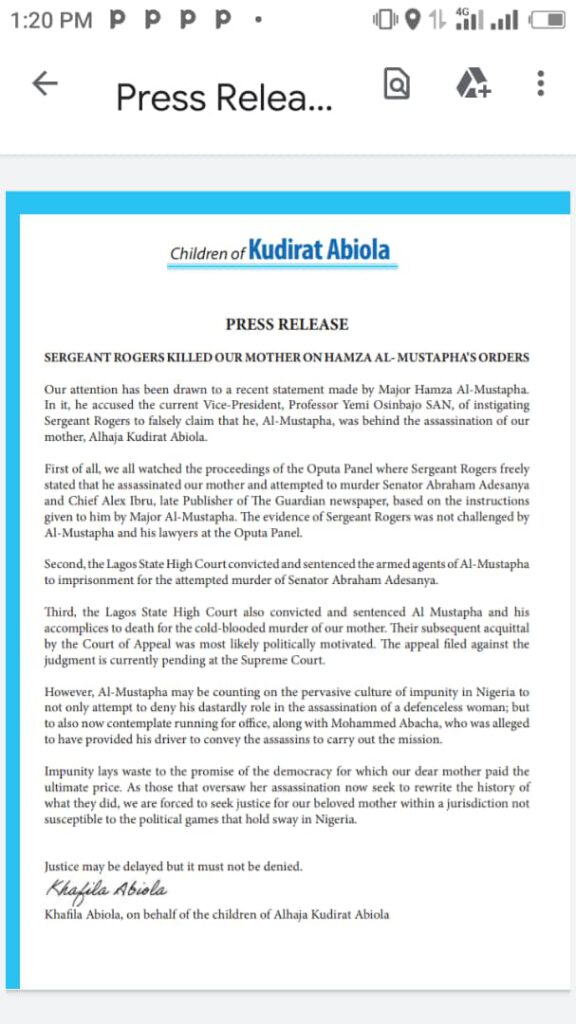 Ogun: We didn’t invite Sunday Igboho to help with security