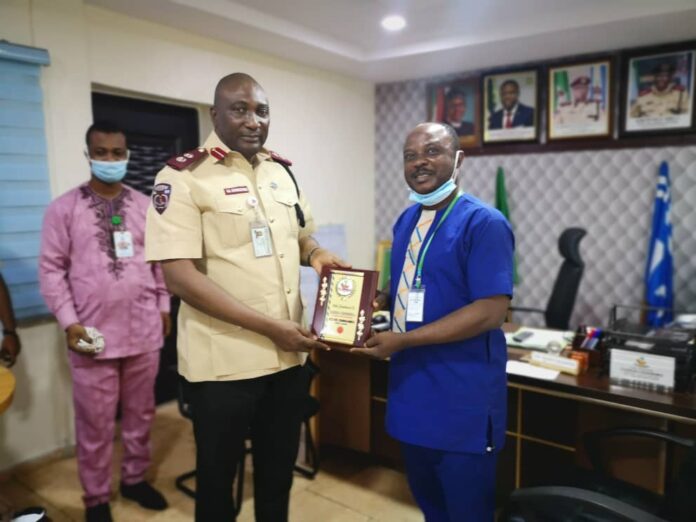 The Commission was created in February 1988 by the Federal Government to among other things, regulate, enforce and coordinate all road traffic and safety management activities.

Speaking during a courtesy visit to the Sector Commander RS2.1 Lagos by the National Association of Online Security Reporters, NAOSRE on Thursday led by the association’s President Mr. Femi Oyewale, Corps Commander Olusegun Ogungbemide re emphasized the important role of the commission in the country’s security and safety architecture by ensuring road safety and effective traffic management.

He noted that though the past 33 years may have been challenging, the Commission has established itself as foremost on the continent as an agency that has entrenched an appreciable degree of safety on the roads in line with global best practice.
Ogungbemide however sued for more media supports in enlightening the public about the activities of the Corps to promote compliance.

“I see today as a great privilege to host NAOSRE. I thank you for monitoring us and presenting the public with balanced reportage about our activities. We value our relationship with the media and we seek more co operation for better and public enlightenment about the Road Safety Corps,” he requested.

He explained that the essence of the courtesy visit was to felicitate with the Commission on the occasion of their 33rd anniversary and seek better working relationship for a safer Nigeria.

Oyewale emphasized the association’s commitment to promoting the activities of security agents through unbiased reportage and vowed to sustain the professionalism the association is noted for.

“The physical presence of the Federal Road Safety Commission at our Dinner Discourse event in December 2020 year was the needed conviction of the cordial working relationship between NAOSRE and FRSC. We cherish our relationship with you and that informs the reason we are also here today to felicitate with you on the occasion of your 33rd anniversary. You can count on NAOSRE always,” Oyewale assured.

In a statement by the Corps spokesman, Bisi Kazeem made available to NAOSRE, the Commission disclosed that it has recorded tremendous achievements in the area of Traffic Engineering, Road Safety Administration, Traffic Management, rescue operation, and crash reduction in its 33rd year of creation.

It noted that it has achieved this glorious feat, as a result of a chain of leadership ingenuity that led to the fusion of the services of volunteers called Special Marshals and social responsibility groups in its programmes to enhance road safety management in Nigeria.

The statement titled “33 Years Of Road Safety Administration, Traffic Management In Nigeria, Journey So Far,” Assistant Corps Marshal Bisi Kazeem explained that FRSC defines its cause in tandem with UN Decade of Action as well as the mantra of functional 21st adding that the Commission is committed to transparent evaluation of trends and sustained drive for improved performance.

Bisi Kazeem’s statement reads in part:
“The establishment of the Federal Road Safety Commission (FRSC) in 1988, as the Lead Agency in road safety administration and traffic management in Nigeria via decree no 45 of 1988 as amended by decree no 35 of 1992, later codified as FRSC Act (CAP 141) Laws of the Federation 1990 and FRSC Act CAP F19, LFN, 2004; FRSC (Establishment) Act, 2007 is to address the ugly trend of road crashes.

“The FRSC has, since its establishment operated in line with best global practices to achieve this cardinal mandate of saving lives without compromise by religiously walking the path of honour in efficient service conveyance, by delivering high quality services in line with a Quality Management Policy that is not at variance with other laws of the land in respect to road safety administration and management in the country.

“In its thirty three years as lead agency in traffic and safety management, FRSC has recorded tremendous achievements in the area of Traffic Engineering, Road Safety Administration, Traffic Management, rescue operation, and Crash reduction. It has achieved this glorious feat, as a result of a chain of leadership ingenuity that led to the fusion of the services of volunteers called Special Marshals and social responsibility groups in its programmes to enhance road safety management in Nigeria.

“To this end, road safety administration in Nigeria has witnessed a paradigm shift from Traditional approach to Safe Systems Approach through the use of state of the art Information Technology facilities; the Corps has been able to enhance its operational capacity aimed at promoting public safety and security. The Corps under different governmental and administrative leaderships has proven to allay the menace of road traffic crashes in the past 33 years.

“Again, it is noteworthy to look at the direction of the present leadership of Dr Boboye Oyememi’s swift response to the incessant abuse of traffic rules which led to the putting together of the OPERATION COBRA to address certain life-threatening traffic-related offences. This singular step has become instrumental to the decline in crash rate as offenders apprehended by the Operation Cobra squad are usually referred to a government health facility for Emotional Stability Test. Oyeyemi’s Management has so far constructed and inaugurated 16 permanent structures in various Sector commands, with other two awaiting inauguration.

“To achieve the stated targets, the Corps has developed transformational initiatives focused on People, Processes and Technology (PPT) that is why today not only does its staff pride as the most disciplined but the Corps stands as the best Information Technology (IT) driven organization in Nigeria with its robust data base and over 95 percentage digitalized administrative and operational procedures.

“It is therefore expedient to state that the era covering the period of reign of the present Corps Marshal, Dr. Boboye Oyeyemi, and establishment of State Traffic Agencies was encouraged to further complement the function of the FRSC within the states. The Corps also embarks in consultation with stakeholders who have become more involved through the mechanism of the special marshals, celebrity Special Marshals and road Safety clubs. The deployment of FRSC personnel to Tank Farms has to a large degree, dwindled the rate of crashes associated with articulated vehicles, particularly tankers carrying petroleum products.

“Through its Safe-to- Load initiative, articulated vehicle have been subjected to checks before they are allowed to load from the various depots across the country with trained personnel of the Corps undertaken routine checks to ensure strict compliance.

“In pursuit of aggressive public enlightenment programme, the FRSC Management under him established the National Traffic Radio 107.1 FM in October, 2019 as a medium for educating mass members of the public on traffic matters and updating them of road conditions across the country. The Corps further introduced a massive welfare scheme through the Post Service Scheme and the 20,000 Housing project for Staff,” Kazeem stated.

Stanbic IBTC to hold 9th AGM on May 27