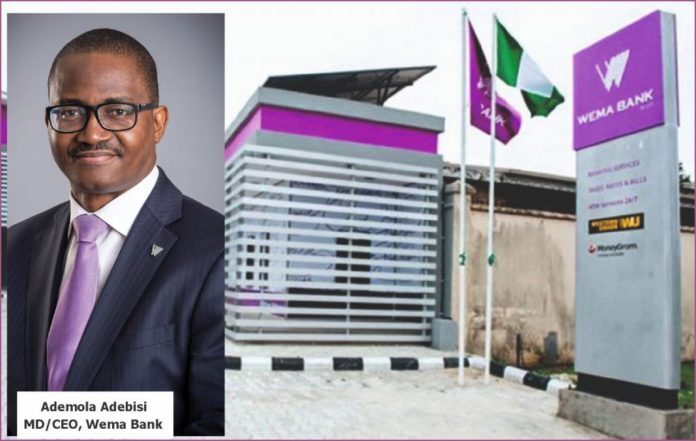 These are not the best of times for one of Nigeria’s old generational banks, Wema Bank Plc, as the financial institution is said to be under the surveillance of the Central Bank of Nigeria (CBN) following illiquidity of its liquidity ratio.

The Moment Nigeria learnt the development has raised fear among the bank’s shareholders and depositors.

This is even as, commercial lenders in Nigeria are averse to extending loans to the bank because of its capital which has fallen below the regulatory threshold. Results of the bank posted to the Nigerian Stock Exchange (NSE) shows that it did not get a single deposit from banks in the 2020 financial year compared to the N3.64 billion it attracted from them in the previous year.

The bank may urgently shore up its capital by raising fresh capital if it would continue to be a going concern.

Speaking with our correspondent, Mr. Moses Ojo, Chief Economist/Head, Investment Research at PanAfrican Capital Holdings, explained that Wema Bank was barred from some investments that could have a positive impact on its performance because of its precarious financial position, which profitability static. “Its capitalization has eroded. It is at risk,” he noted.

“Having looked at the bank and seeing it is one of the weakest lenders in the country, other banks will be wary to do business with it or giving them loans. They know the stand of each bank in the system,” Ojo added.

Meanwhile, the unimpressive performance of Wema Bank was again replicated at the end of the 2020 financial year, heightening shareholders’ concern over the lender’s recent poor run of results.

The unaudited 2020 financial statement of the bank released recently showed that as a group it struggled to generate income as it shrunk 14.79% to N80.85 billion on the back of the huge 73.18% decline in net trading income and 8.41% drop in interest income during this period.

The bank experienced four consecutive dips in the four quarters of last year, which has made shareholders express worry over this downturn.

The cut in expenses in the last financial year- interest cost reduced 24.60%, personnel expenses dipped 5.83% and other operating expenses went down 1.34%- could not bolster its profit during this period.

Despite the sluggish performance last year, the bank’s total liability rose 40.49% to N928.22 billion bolster by deposit from customers which grew 40.68% to N812.10 during this time.

Its shareholders last got a dividend at the end of the 2018 financial year, when they were paid 3 kobo per share.
Industry watchers have however attributed the lender’s woos to the poor performance of the its Managing Director/ CEO, Mr. Ademola Adebise.

Mr. Adebise was appointed in September 2018 as the bank’s head-honcho to turn around the fortunes of the lender following the retirement of Mr. Segun OIoketuyi.

Ironically, three years after, Mr. Adebise has not been able to deliver. This, we privately gathered, is not unconnected with the poor results of the bank due to lack of trust customers and even other financial institutions now have with the lender triggered by the lack of administrative experience and expertise of the management led by Mr. Adebise.

Adebise, with a career in banking spanning over 30 years (inclusive of four years in management consulting), and an amazing profile as an alumnus of the Advanced Management Program (AMP) of the Harvard Business School, Lagos Business School, a Fellow of the Institute of Chartered Accountants of Nigeria (ICAN) and also holds a Bachelor’s degree in Computer Science from the University of Lagos, financial analysts expected a major turnaround for Wema Bank under his watch but reverse is the case.

A visit to the lender’s headquarters located at 54, Marina, Lagos, will tell how its branches operate – in a low-key setting. The once-bubbling branches of the bank have now become a shadow of themselves as many depositors of the bank have started closing their accounts. While other commercial banks in the country are leveraging on digital innovations to enhance customer service delivery and open fresh streams of revenue, Wema Bank is said to be languishing in its stone age system of operations.

Finding by us revealed that the bank’s internet banking APP, ‘Wema Bank ALAT, its Unstructured Supplementary Service Data (USSD) banking platform, *945# Smart Code, are nothing to write home about as customers of the bank have continued to experience difficulties using the services. Industry experts and financial stakeholders had frowned at the fact that Polaris Bank

Efforts by our reporter to reach Funmilayo Falola, Wema Bank’s head of Marketing, Corporate Communications and Investor Relations, for the bank’s angle to the developments proved futile as calls and text message placed to her mobile lines went unanswered as at press time.