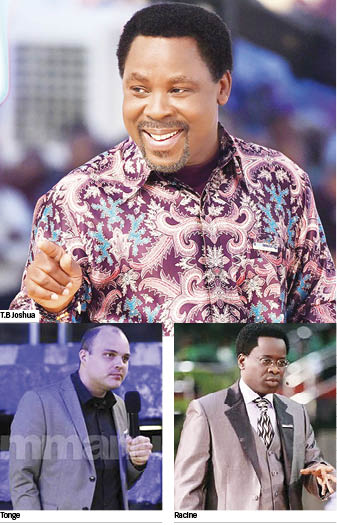 There are strong indications that reports tipping Evangelist Evelyn, wife of demise televangelist and founder of Synagogue Church of All nations (SCOAN), Prophet T B Joshua, has been chosen to succeed her late husband as the head and spiritual director of the SCOAN, is far from the truth.

A reliable source close to the SCOAN, who spoke to our correspondent yesterday, disclosed that  top on the list of T.B Joshua’s successors are two foreign nationals from United Kingdom and Senegal respectively.

Recently, online reports making the rounds and attributed to elders of the SCOAN had tipped Mrs Evelyn Joshua as the choice successor to her late husband.

An unidentified top aide of the late Prophet Joshua was quoted as saying: “As it is said that nature abhors vacuum, someone must take charge immediately and give spiritual direction on the mode of service continuity. So much spiritual and financial efforts went into building of SCOAN and it cannot just waste away.”

“None of the pastors were trained specially to succeed him but for now, the wife is strong enough and well prepared to take charge. She is much loved, she is very intelligent and from her closeness and lessons learnt from her husband, she is good enough to lead the people to serve God.”

But the source within the SCOAN told our correspondent that the issue of T B Joshua’s successors is not yet resolved as there were more issues the church leadership, particularly Joshua’s disciples, needed to resolve before a credible successor can emerge.

His words: “As you know this level of service is not determined be exigencies but by call of God. If Prophet T.B Joshua was called by God, it then means that whoever will take over from him must be called by God. The church will have to sit and decide who will succeed Baba. By the time you make enquiries into the reports that say family had decided that Evangelist Evelyn will succeed her husband, you find out that church will tell you that the issue is not yet decided.

A top aide of Prophet T.B Joshua, who spoke to our reporter, concurred saying “For now, we at the SCOAN are presently occupied with burial plans of Prophet T.B Joshua. And till he has been given befitting burial we will not be able to settle down to choose his successor.”

Invariably, another source in the SCOAN’s media said: “Unless there is going to be an agreement between the disciples and the family, I can assure you that some of the disciples are more powerful than Mrs. Joshua and she needs to work in consonance with the disciples.

“Mind you, that ministry developed, not only through the spiritual gift of our late founder, but with the contributions of the disciples. Most of them are as old as the ministry; and some of the disciples might not easily be subservient to Evelyn. The disciples are very powerful, and if Baba were alive today he would not want to trample on their feelings if the disciples.

“There are a lot of issues those disciples would have to sort out before an acceptable successor will emerge. A lot of issues will come out. The church will have to seat and decide who will succeed Baba,” the source said.

Speaking further on who the cap fits most, our source revealed that aside Joshua’s wife Wiseman Racine who hells from Senegal and Evangelist Christopher Tonge, a Charismatic British national are among the top contenders for T.B Joshua’s successors.

He said: “Evelyn too is one of the people who could succeed Prophet T.B Joshua. Of course she has been preaching in the Synagogue in the past. But does she really have the call to officiate at that level in terms of spiritual gift prophetic and miracle making prowess?

Our findings prior to Evangelist Christopher Tonge’s training as a prophet, he has been handling the media aspects of the ministry; as a key anchor of Emmanuel TV, the SCOAN’s official media outlet to the rest of the world. “He is also very charismatic; his father Dr Garry Tonge, a PHD holder is the biggest ambassador of the SCOAN in Europe.

“The Tonge family coordinates the activities of the SCOAN in the UK and Europe. Dr Tonge is very humbly, unassuming but a very influential man. You will never know that they handle operations of the SCOAN in Europe regarding the huge influx of foreign religious pilgrims from the U K and Europe. He is instrumental to most of the charity activities that the SCOAN carry out abroad. I personally believe that he will do well as T.B Joshua’s,  successor,” the source further said.