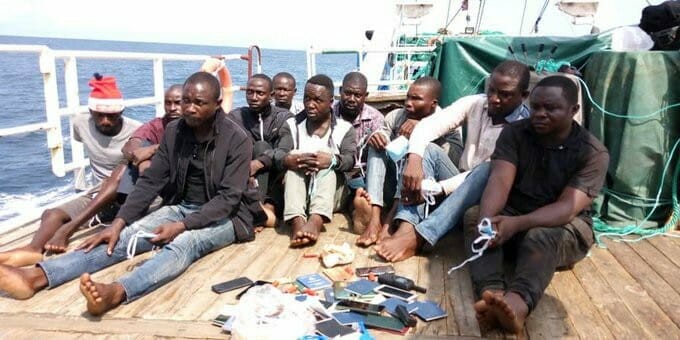 In another major victory to Nigeria’s anti-piracy war, a Federal High Court sitting in Lagos Thursday sentenced 10 pirates to 12 years imprisonment each with a N250,000 fine on each count for their  involvement in the 2020 hijack of a merchant vessel, FV Hailufeng 11.

Delivering the judgement on Wednesday, Justice Ayokunle Faji of the Federal High Court, Ikoyi submitted that piracy has been an embarrassment to the country and had impacted the economy negatively.

He stated that punishment for this act must be proportionate to the offence committed by the convicts to serve as deterrence to others.

In his submission, the lead prosecution counsel, Mr. Alban Navajo,averred that the verdict would sent a strong warning to other criminal elements that Nigeria has zero tolerance for maritime criminals and that Nigerian institutions both Nigerian Navy, prosecuting agencies and security agencies are ready to counter criminal activities. The defence counsel vowed to appeal the judgment.

It could be recalled that the Nigerian Navy rescued 15 crew members on board a Chinese vessel, FV HAILUFENG 11 from pirates’ attack on May 15, 2020.

Subsequently, 10 suspects were charged before the Federal High Court Ikoyi.

The suspect’s were charged to three counts on piracy with the offence contravening the provisions of Sections 3, 10 and 12 of the Suppression of Piracy and Other Maritime Offences Act 2019.

Meanwhile, the International Maritime Bureau (IMB) had in its recent Q2 2021 report noted that piracy in the Gulf of Guinea was lowest in 27 years during the period, attributing the development to the Nigeria’s Intergrated Maritime Security Programme, otherwise known as the Deep Blue Project which was officially launched by President Muhammadu Buhari this month.

However, the Director General of Nigerian Maritime Administration and Safety Agency (NIMASA), Dr Bashir Jamoh had disclosed that the actual commencement of enforcement of the Deep blue project was February 2021, saying the good result being recorded by the security programme, has made it morally binding on the international maritime community to remove the labelling of Nigerian as a ‘war zone area’ as well as remove ‘war zone insurance cover’ imposed on ships destined for Nigerian waters.