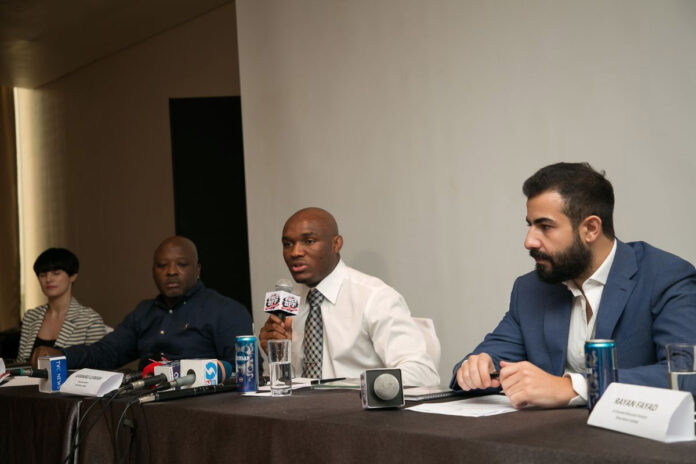 Kamaru Usman, who returned to Nigeria to organise the Face-Off Fight Night – the first edition of the Martial Mixed Art (MMA), announced the fights series which will hold in Lagos on Friday, January 7, 2022, at the grand Africa Ballroom of the Lagos Continental Hotel in Lagos from 6 pm in a well-attended press conference which was held in Lagos on Wednesday, January 05, 2022 at the Lagos Continental Hotel.

Revealing the vision behind the historic event, 5five 4four’s sole aim is to provide opportunities for the budding fighters in Africa. Kamaru Usman who was excited about the partnership said: ‘I’m happy to go into the partnership with 5five 4four Limited as it provides opportunities for more youths in Africa to become world champions like myself’.

Speaking about the idea behind the partnership and the future plans, the Number 1 Pound for Pound fighter said: “It’s quite often that someone gets to a position of power and they want to help, but the difficult aspect is how to help. I have thought about it over and over on how I can help. How can I go back and create opportunities for children like myself and this is it and this is the best way to do that. I was able to run into my amazing partners who had a similar vision as well, and this vision is to create opportunities to be able to get all those kids like myself to change their lives or their families lives.

“We all know it, this is Nigeria. When you are successful in the family, the whole household must come with you and so that’s part of what birthed this idea, being able to have that vision, being able to have amazing partners that can help you carry out that vision; and that’s why we are here today. This is our first event, our introductory event for everyone.

“We have big plans to continue all this and we want to put it in a place of creating infrastructure to build things that are not only going to attract tourists to our great country but things that are going to bring economic stability to all of Nigeria and to eventually all of Africa.”

Powered by 5Five 4Four and endorsed by the Lagos State Sports Commission, this event will see five professional fights among ten MMA fighters from Africa and according to the chairman, Lagos State Sports Commission, Sola Aiyepeku who represented the governor, “I must say that there is no doubt that Mr. Governor loves sports and he understands the power of sports, the influence and the impact it can make on our environment. The Lagos State Government is interested, just as we are interested in so many other martial arts therefore we are coming together to ensure that the job is done and the plan which is to ensure that this full foundation is properly laid so that we can build a tall skyscraper that would last forever, is executed successfully. In so doing, there is a plan to establish an MMA Federation here in Lagos state, which will be the first in Nigeria.

”While the fight will feature the first runner up Daniel ‘Big Shark’ Emeka taking on Ayivor ‘Finisher Mawuko, Damilare ‘Ring Beast’ Abdulrahim will face off Ugochukwu ‘Nicotine’ Melvin. Where Jude ‘Hurricane’ Ezugwu is slated to go toe-to-toe with Richard ‘Resident Ninja’ Chidi Nwankwo, Emmanuel Onoja will battle it out with Richard ‘Shield’ Muzaan.”

In preparation for this epic fight night, Kamaru Usman visited the University of Lagos, toured and commissioned the MMA sport center with a ground-breaking event and was specially welcomed by the Vice-Chancellor, Oluwatoyin Ogundipe, executives of the institution and students.

5Five 4Four Limited is an African oriented MMA promotion company and the producer of the African Knock Out (AKO) show, with the mission to promote African talents and help develop MMA into a major sport in Nigeria and Africa.

5Five 4Four Limited is the creator and producer of THE AFRICAN KNOCKOUT (AKO), Africa’s first of its kind Mixed Martial Arts Reality Television Show and is set to organize a series of Mixed Martial Arts (MMA) fights nights in Lagos, Nigeria. FACE-OFF Fight Nights are a series of fights events organized by 54 Limited and powered by the UFC Welterweight World Champion, Kamaru “The Nigerian Nightmare” Usman; featuring MMA fighters from all over Africa, celebrities and special guests.

Meet the contenders for the inaugural fight night:

FACE-OFF Fight Nights aims to promote the emerging MMA culture in Africa and cultivate a cult following of fans and enthusiasts establishing a network that will form the base of building the African MMA ecosystem. Five (5) professional MMA fights featuring AKO Season 1 and international fighters will compete in one (1) night live at the Lagos Continental Hotel on the 7th of January, 2022.