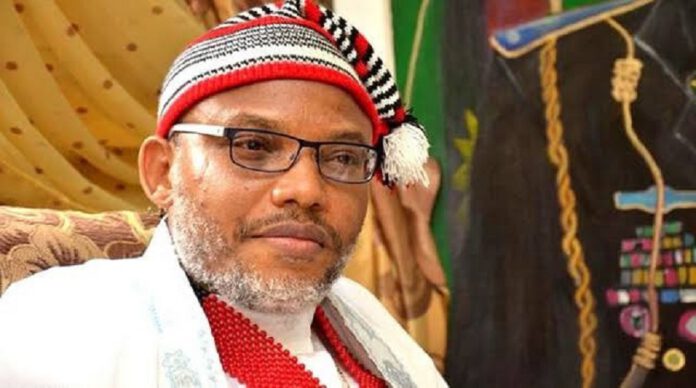 The federal government has filed a fresh charge bordering on terrorism against Nnamdi Kanu, leader of the Indigenous People of Biafra (IPOB).

Aloy Ejimakor, counsel to the IPOB leader, confirmed the development to TheCable on Monday.

Kanu, who is standing trial on charges bordering on treasonable felony, is currently in the custody of the Department of State Services (DSS).

The IPOB leader, who had been rearraigned in October 2021 on a seven-count charge, will now take his plea in response to a charge on 15 counts, including on terrorism.

Meanwhile, he is scheduled to appear in court on Tuesday for the continuation of his trial.

Tuesday had been fixed to hear the application challenging the competence of the charge and jurisdiction of the court.

Should Kanu be rearraigned on Tuesday based on the new charge, a fresh bail application will be taken.

On Friday, Kanu had in a statement issued by his lead counsel, Ifeanyi Ejiofor, asked his supporters to conduct themselves in a peaceful manner during his next court appearance.

Meanwhile, a high court in Umuahia, Abia state, has fixed January 19 to deliver judgment in the fundamental human rights suit instituted by the IPOB leader.