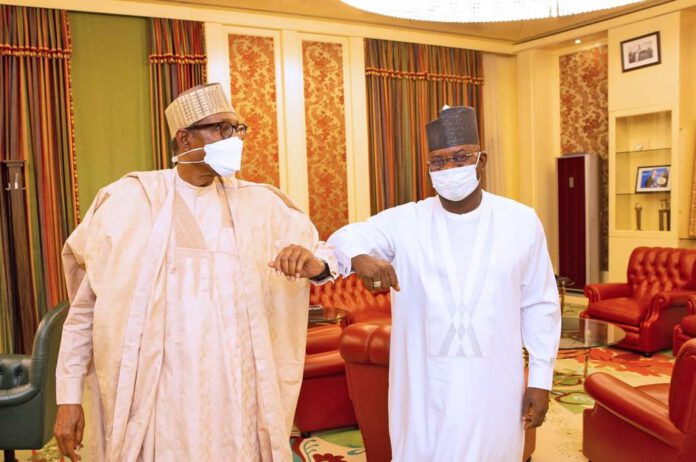 Governor Yahaya Bello of Kogi State, on Tuesday, paid a visit to President Muhammad Buhari at the Aso Villa in Abuja.

According to the Chief Press Secretary to the Governor, Onogwu Mohammed, Bello and President Buhari had detailed discussions on politics and security.

“The Governor, in his usual concern for matters relating to governance and security, was at the villa for progressive talks with the President. They shared ideas and also reached certain conclusions that I won’t want to disclose for confidentiality purposes,” he said.

The Governor’s media aide added that Bello applauded the President’s efforts in curbing insecurity in the North and other parts of the country, adding that the people of the zone would soon start reaping the dividends of those efforts.

Mohammed also noted that President Buhari, who wore a calm demeanour, received the Governor with joy.

Bello is one of the leading aspirants seeking to succeed President Muhammadu Buhari in 2023 and he has enjoyed support from different groups across the country.

Earlier in January, no fewer than 600 women groups, drawn from different parts of the country, converged on Abuja for a solidarity walk for Governor Bello to run for presidency.

First Lady Olena Zelenska warns no one in Ukraine is safe...