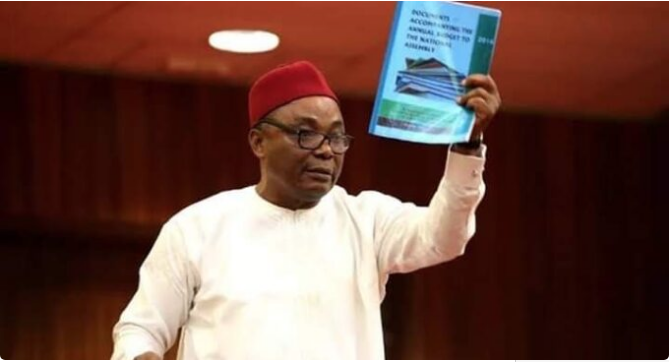 The senator was convicted by the Lagos division of the appeal court on Friday.

The Economic and Financial Crimes Commission (EFCC) had arraigned Nwaoboshi and his two firms – Golden Touch Construction Project Ltd and Suiming Electrical Ltd —  in 2018 before Mohammed Idris, a judge who was later elevated to the court of appeal.

They were then re-arraigned before Chukwujekwu Aneke on October 5, 2018.

In the two-count charge marked FHC/L/117C/18, the EFCC alleged that the defendants laundered N322 million between May and June 2014.

However, in a judgment delivered in June 2021, Aneke held that the agency failed to prove the elements of the offences for which it charged the senator.

The judge also held that the prosecution’s case collapsed because “bank officials were not called to testify”.

Aneke also discharged the companies on the same grounds.

Not satisfied with the judgment, the anti-graft agency filed an appeal.

Delivering judgment on Friday, the appellate court overturned the lower court’s judgment and convicted the senator.

According to a statement by the EFCC, the court of appeal held that the trial judge erred in dismissing the charges against the respondents.

“It said the prosecution had proved the ingredients of the offence and consequently found the defendants guilty as charged,” the statement reads.

The court of appeal also ordered that the two companies be wound up.